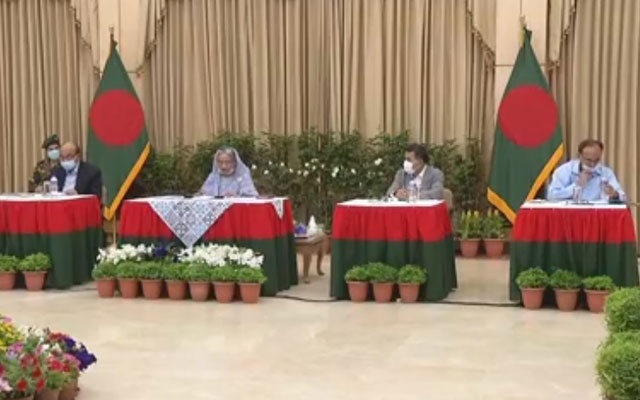 The current fiscal’s budget implementation won’t be hampered that much with the stimulus packages being rolled out to protect the economy from COVID-19 impacts, finance ministry officials have claimed.

They said the government has to bear the least burden even though revenue collection was bleak as most of the money will come from the banking channel.

Prime Minister Sheikh Hasina on Sunday declared a total of five stimulus packages worth Tk 727.5 billion or GDP’s 2.52 per cent to help recoup economic losses caused by the impact of coronavirus in the country.

Like other economies in the world, Bangladesh economy is also likely to face a big challenge from the COVID-19 pandemic, which may eventually expand the budget deficit this year, the PM also feared while declaring the support packages.

“The PM has announced the stimulus package for an emergency. However, the packages given on special consideration won’t increase the government’s expenditure that much,” a finance ministry high official insisted.

“Budget won’t be hampered as well because the money will mainly come from the banking sources,” he added.

In the first eight months of the current fiscal year, the government’s revenue-earning shortfall was nearly Tk 450 billion, which is likely to increase further at the yearend.

Centre for Policy Dialogue (CPD), a leading independent think tank, has assessed that revenue shortfall may stand at Tk 1 trillion in FY20 with budget deficit rising to 5.5 per cent of GDP from originally estimated 5 per cent of GDP for the pandemic.

At the same time, out of Tk 55 billion estimated interests on bank loans, the government has to bear Tk 27.50 billion while the industries taking the loans will have to bear the rest of the money.

The loans will be given for four to six months and the loan recipients will be able to take loans again after refunding the previous loans within the timeframe, he also explained, adding that a detailed guideline will be prepared by Bangladesh Bank later.

Finance ministry officials informed that the ministry and the central bank have already started their work to make ready the guideline defining the areas of utilization, beneficiaries, loan receipt and refund time and other aspects.

State-run and private banks will start providing loans immediately after issuing of a circular by the central bank.

Other two packages are basically revolving funds of Bangladesh Bank. The PM has declared to add Tk 127.5 billion to the existing Export Development Fund (EDF) to help expand raw materials import under the block to block LC facility.

Earlier on March 25, the PM had already declared Tk 50 billion credit support package of 80 per cent export-oriented industries to bear their workers’ salaries.

The service charge of this scheme is only 2 per cent for which the central bank has already issued a guideline.