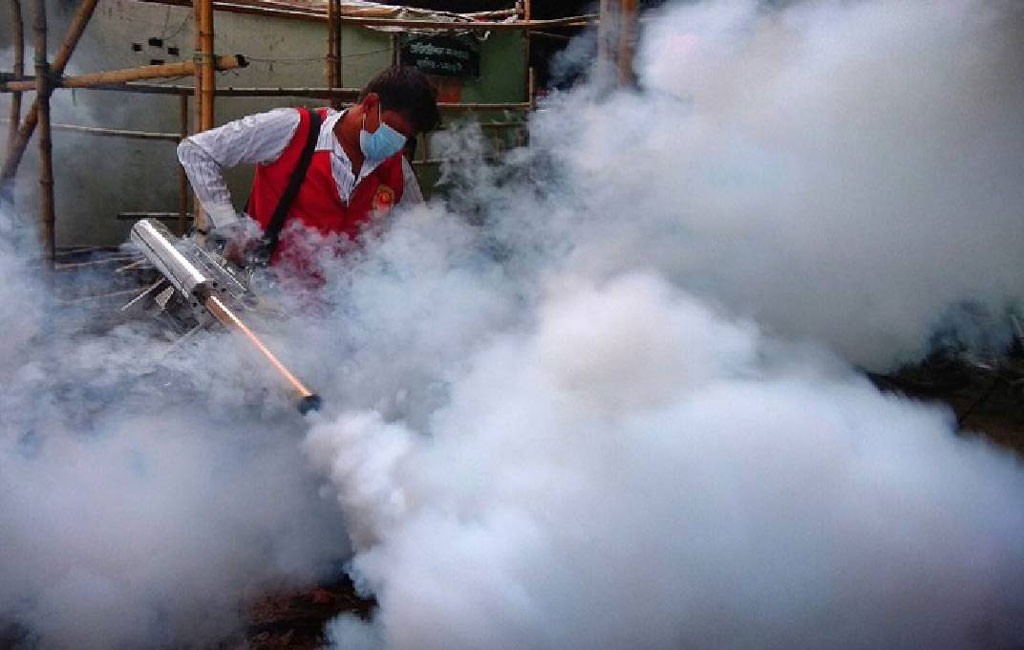 Although Dhaka city-dwellers have been complaining that they are suffering a lot due to increase in culex mosquitoes, the authorities concerned of both the Dhaka North City Corporation (DNCC) and Dhaka South City Corporation (DSCC) claimed that their employees are working up to the maximum of their abilities to kill adult mosquitoes.

City-dwellers alleged that mosquitoes both at night and day are now getting intolerable. Anti-mosquito drives by both city corporations have become very slow after the last city corporation elections in February 1 this year, they said.

Md Nizam Uddin,40, a shop owner living at Adarshanagar of Mirpur-11, said despite shutting all the windows and doors he cannot  stay at home as the number of mosquitoes is unlimited. “We have to use two mosquito coils in the evening every day. We have to use mosquito coil at noon too,” he said.

Replying to a question, he said the DNCC employees were seen very active before the last election. “I did not see anyone spray anti-mosquito medicine for the last two weeks,” he said.

He feared the proliferation of Aedes mosquitoes, the carriers of dengue, this year again like last year if the corporation does not take initiatives immediately.

Moshtaque Ahmed, a resident of Middle Basabo under the DSCC, said mosquito infestation has increased greatly compared to several weeks ago. We are staying inside our flat all day and night closing doors and windows using anti-mosquito spray.

Replying to a question, he also said he has not seen any employee of the corporation spraying anti-mosquito aerosol for the last one month in their locality.

He also said, " I fear the outbreak of dengue again this year which will be very much unfortunate for the city dwellers as the possibility of coronavirus outbreak looms."

Contacted, Dr Manzur Chowdhury, an entomologist and former president of Geological Society of Bangladesh, said dirty water is stranded on city drains as most of them are uncovered. Drains and canals, which are organically polluted, are great breeding grounds for culex mosquitoes. As those are not cleaned properly, the intensity of culex mosquito is very high. "The breeding of culex mosquito is very high in those areas--drain and stranded canals where organic pollution is high," he said.

Replying to a question, the entomologist said around 300 dengue cases were identified in January to March this, while the figure was only 73 last year. It indicates that dengue may hit again this year, he said.

"So, the authorities have to take immediate initiative to destroy the breeding grounds  of aedes mosquito. Otherwise, it would become intolerable, Dr Manzur said.

DSCC Chief Health Officer Brigadier General Dr Sharif Ahmed said though the employees of the corporation are fearful of possible infection of coronavirus, they are spraying disinfectant water on the streets to prevent coronavirus outbreak alongside insecticide on culex and Aedes mosquito breeding grounds giving maximum efforts.

“We have already identified the hotspots of Aedes mosquitoes breeding grounds in February and in the meantime we have completed two crash programmes to destroy the sources of Aedes mosquito. We also declared wards No  5,6,11, 17,37 and 42 as vulnerable ones,” he added.

"We are trying to give relief to our city-dwellers from both the outbreak of culex and dengue working with maximum ability," he said.

“We are fighting against Aedes and Culex mosquitoes. In the meantime, coronavirus has appeared as a curse. So, we are continuing to spray adulticide and larvicide on the breeding grounds alongside anti-infect water on the city streets,” he said.

Replying to a question, the DNCC Panel Mayor said they have sufficient stocks of adulticide, larvicide, Malaria B oil and other pesticides to destroy mosquitoes and their breeding grounds.

“We have previous experience to fight against Aedes mosquitoes and we have already started our work accordingly to prevent the outbreak of dengue this year,” he added.