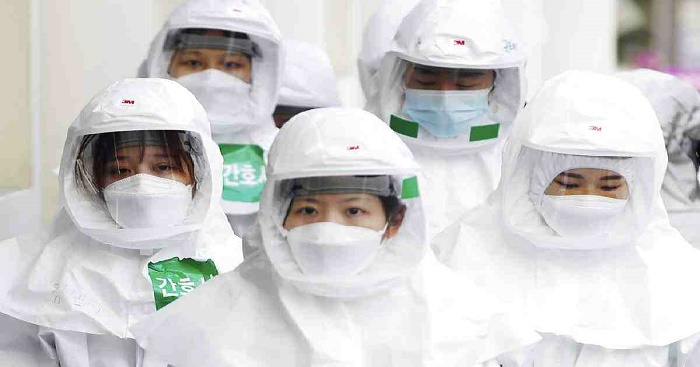 Spain overtook China on Monday in confirmed coronavirus infections as the pandemic stretched scores of Spanish hospitals to their breaking point. As confirmed virus deaths in New York surpassed 1,000, President Donald Trump extended stay-at-home recommendations for a month in an abrupt turnaround.

With a population of only 47 million people to China's 1.4 billion, Spain's tally of infections reached 85,195, an 8% rise from the previous day but down from earlier increases that had rocketed up to 20%. Spain also reported 812 new deaths, raising its overall confirmed death toll to 7,340.

Experts say those figures — and ones in every other country — are much lower than the actual impact of the pandemic, due to limited testing, counting irregularities and mild cases that have been missed.

Spain and Italy make up more than half the world's death toll of over 34,800 people from the virus that has upended the lives of billions and devastated world economies. Their health systems have been crumbling over the weight of caring for so many desperately ill patients at once. Italy has by far the most reported virus deaths, at nearly 11,000.

At least six of Spain's 17 regions were at their limit of ICU beds and three more were close to it, authorities said Monday. Crews of workers were frantically building more field hospitals.

Despite the declining infection rate, Spanish health official Dr. Maria José Sierra said there's no end to the stay-at-home restrictions yet in sight.

"Reducing the pressure on the ICUs will be important for considering de-escalation measures," said Sierra, who took over Monday as the health emergency center's spokesperson after its director tested positive.

Nearly 15% of all those infected in Spain, almost 13,000 people, are health care workers, hurting hospitals' efforts to help the tsunami of people gasping for breath.

In hard-hit Madrid, flags were hoisted at half staff for an official mourning period. During a minute of silence for the dead, Madrid's Puerta del Sol central square was empty as bells tolled.

In a situation unimaginable only a month ago, Italian officials were cheered when they reported only 756 deaths in one day. Italy has 97,689 confirmed infections but said the number of positive cases in the last day increased just 5.4% and the number of deaths have dropped about 10% a day since Friday.

''We are saving lives by staying at home, by maintaining social distance, by traveling less and by closing schools," Dr. Luca Richeldi, a lung specialist, told reporters.

In a stark reversal of his previous stance, Trump extended federal guidelines recommending that Americans stay home for another 30 days until the end of April to slow the spread of the virus. The turnabout came after Dr. Anthony Fauci, director of the National Institute of Allergy and Infectious Diseases, said up to 200,000 Americans could die and millions become infected if lockdowns and social distancing did not continue.

"We want to make sure that we don't prematurely think we're doing so great," Fauci said.

The U.S. now has more than 143,000 infections and 2,500 deaths, according to Johns Hopkins University, while around the world more than 735,000 people are infected.

Moscow went on its own lockdown Monday as all of Russia braced for sweeping nationwide restrictions. The Russian capital of 13 million accounts for more than 1,200 of the country's 1,836 coronavirus cases.

"The extremely negative turn of events we are seeing in the largest European and U.S. cities causes extreme concern about the life and health of our citizens," Moscow Mayor Sergei Sobyanin said.

Experts say the critical situations seen in hospitals in Italy and Spain will be soon heading toward the United States.

Coronavirus patient Andrea Napoli, 33, told The Associated Press he didn't remotely expect that he would be hospitalized, struggling for his life, since he was young and fit. But what he saw shocked him.

While he was being treated in Rome, three patients died in his ward. He saw doctors stressed and exhausted from the long hours, out of breath from pushing equipment around, dressed in protective masks, suits and gloves.

For most people, the coronavirus causes mild or moderate symptoms, such as fever and cough. But for others, especially older adults and people with existing health problems, the virus can cause severe symptoms like pneumonia and be fatal. More than 156,000 people have recovered, according to Johns Hopkins.

China's National Health Commission on Monday reported 31 new COVID-19 cases, among them just one domestic infection. At the peak of China's restrictions, some 700 million people were ordered to stay home, but those rules are easing.

New York state remained the epicenter of the U.S. outbreak, with the vast majority of the deaths in New York City. But infections were spiking not only in cities but in Midwestern towns and Rocky Mountain ski havens. West Virginia reported its first death, leaving only two states — Hawaii and Wyoming — with none linked to COVID-19.

The virus is moving fast through nursing homes and other places for vulnerable people, spreading "like fire through dry grass," New York Gov. Andrew Cuomo said.

Britain's National Health Service said EasyJet and Virgin Atlantic were asking cabin crew who have been laid off — especially those with first aid training — to see if they would work in makeshift hospitals under the supervision of doctors and nurses.

Britain's political elite have been hit hard by the coronavirus pandemic, with the country's prime minister, health minister, chief English medical director and Brexit negotiator all testing positive and in isolation, as well as the heir to the throne, Prince Charles.

Cases across Africa rose close to 5,000 in 46 countries. Zimbabwe began a three-week lockdown Monday and more cities across the continent were shut down.

The pandemic was also taking a harsh economical toll around the world.

A lockdown in India covering the country's 1.3 billion people has put day laborers out of work and left families struggling to eat. With no jobs, those in the country's crowded cities are walking back to their native villages.

In Europe, budget airline EasyJet grounded its entire fleet of aircraft — parking all 344 planes — amid a collapse in demand due to the COVID-19 crisis.

Asian markets started the week with fresh losses. Japan's benchmark fell nearly 3% and other regional markets were mostly lower. Shares in Australia, however, surged 7% after the government promised 130 billion Australian dollars ($80 billion) to pay up to 6 million workers the minimum wage for the next six months.

"We want to keep the engine of our economy running through this crisis," said Australian Prime Minister Scott Morrison.