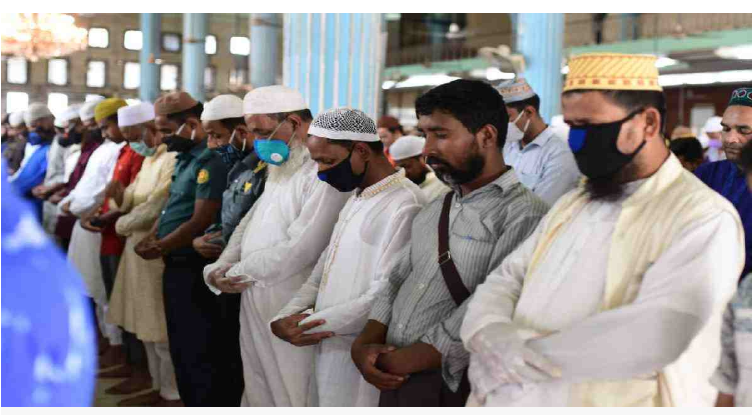 The Islamic Foundation on Monday issued some guidelines over various issues, including offering namaz and maintaining people’s safety at mosques, and the funeral of coronavirus patients.

Aleam-Ulema (Islamic scholars) at an emergency meeting on Sunday at its Agargaon office provided the guidelines for general people, imams, khatibs, and mosque committees, said a press release on Monday.

The meeting, chaired by Anis Mahmud, Director General of the Islamic Foundation of Bangladesh, urged people to pray to almighty Allah to save them from the pandemic.

It suggested people to refrain from committing sins and offer following’ Duas” frequently:

It asked people having coronavirus symptoms, sick, elderly people or those arrived here from corona-hit countries or regions not to go to mosques but to offer prayers at home.

All the imams, khatibs, muazzins and mosque committees have been asked to clean the mosques after namaz for five times and change the floor mats or carpets.

The Islamic Foundation has urged people to cooperate with all concerned in the funeral of corona-infected people. It said showing negative attitude towards them go against Islam and inhuman act. According to Hadith, pandemic victims get the dignity of martyrs, it said.

The Islamic Foundation has urged people to extend helping hands and provide food to the low-income people during the crisis.

It urged all not to spread any rumour and also suggested them not to believe those as well because rumour can be fatal for people.

All the Khatibs, imams, mosques committees, media, foundation’s division, district and upazila level units as well as people of all professions have been asked  to publicise these directives.

It also requested people to keep presence at the mosques limited during Jamaat and Jum’a prayers to prevent transmission of coronavirus.

Earlier, it also advised returnees from abroad, persons suffering from fever, cough and cold and coronavirus-like symptoms, to avoid going to mosques and public gatherings.

Bangladesh reported another COVID-19 case in the country on Monday, taking the total number of confirmed cases to 49. The country so far confirmed five deaths.

The global death toll climbed to 33,993 on Monday, according to Worldometer.