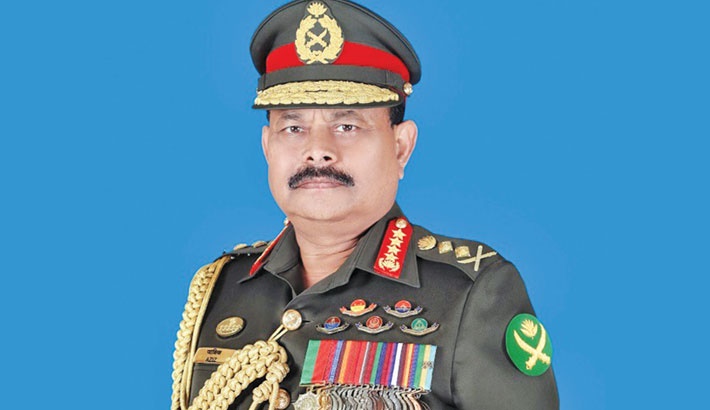 General Aziz Ahmed, chief of the army staff, on Friday expressed his confidence to win the war aga-inst coronavirus, saying his forces will leave no stone unturned to fight the bug.

In exclusive comments to the daily sun, Gen Aziz Ahmed said the army will do everything possible under the prudent leadership of our Hon’ble Prime Minister Sheikh Hasina to fight the virus.”

“Army will render service in aid to Civil Power as long as the government wants,” he added.

The army chief said, “The common people, including the civil administrations, are highly energized and seem to be mentally relieved due to army presence and assistance to fight coronavirus threats.”

He said with a note of a confidence, “Insha Allah, army men will do their best.”

The government called in the armed forces on Monday in aid of the civil administration as the country’s coronavirus situation has worsened.

The forces —- army, navy and air force —- fanned out across Bangladesh and have enforced a government order for all to stay indoors, shutting educational institutions and businesses.

Lieutenant Colonel Abdullah Ibne Zaid, the defence spokesman, separately told the daily sun that some 3,000 men from the army and 400 from the Navy have been deployed, while the air force is on standby for ferrying men and medical aid to any part of Bangladesh.

“The public has been helping troops on the streets by obeying their orders to stay indoors and keeps businesses shut as per the government ban orders,” he said, adding that they were working with “humanity in mind” so that people like rickshaw-pullers who live by the day do not suffer.

Lt. Col. Zaid, director of the Inter-Services Public Relations Directorate, pointed out that those men who are deployed “will also respond to medical emergencies if needed.”

Asked how are the men and women in uniform were protected from the virus, he said, “these personnel are risking their lives leaving their families behind to help the nation in this moment of crisis ... periodically new batches will replace the old, who will be quarantined on return to their barracks for safety.”

The army men were seen patrolling the streets of cities and towns, which local residents said will go a long way in helping the government efforts to contain and finally defeat the deadly coronavirus that has affected major powers of the world, which has been fighting a tough battle against the bug. There is so far no known cure against the virus.

Two young army soldiers on duty at a Dhaka point wearing masks and hand gloves armed with an automatic gun looked relaxed and refused to talk to this correspondent.

When pushed and told if they were not afraid of working in this risky situation, a young lanky soldier muttered, “This is army (life) ... I am not afraid.”

He added bluntly: “I have to die one day sooner or later, but feel good to help people in this hour of need.”

A 22-year-old fire fighter said, “I have faith in Allah as I am serving the people in distress ... Inshallah (God Willing) I will be fine.”

Residents in Khagrachhari, Pabna and Rangpur welcomed the deployment of armed forces, saying it is having a very positive impact.

“After the army came to see the situation, everyone has become more alert,” Faisal M Ahmed, a Dhaka University student by telephone from his Dhanuaghat village in Pabna district.

He added: “I am in home quarantine along with my family as asked by the local administration since we came from Dhaka.”

The 200,000-strong Bangladesh armed forces, which the Global Firepowers’ 2019 Military Strength ranking named as third most powerful in South Asia, has been modernised by Prime Minister Sheikh Hasina, who also hold the defence portfolio, over the past decade.

The armed forces have also been called in the past in this calamity-prone South Asian country, especially during floods and cyclones in aid of the civil administration.

They have also helped in some manmade disasters like the Rana Plaz tragedy in Savar.