Country not under lockdown: Info Minister 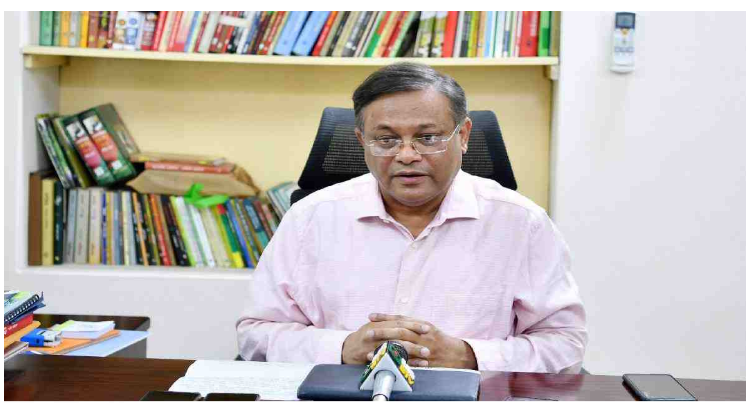 Mentioning that there has been no countrywide lockdown, Information Minister Dr Hasan Mahmud on Friday said it is very regretful that people are being harassed by the members of law enforcement agencies when they go out for important reasons.

The Information Minister made the remarks at a live Facebook press conference from his official residence in the city.

He said the government and the administration suggested people not to roam on the streets unnecessarily.

Dr Mahmud said even the police headquarters on Thursday asked its all field-level officials that one can come out to the streets, if required, and suggested the officials to send people back to their residences convincing them if anyone goes out to streets unnecessarily.

So, he added, this is not the right job to harass anyone when he or she goes to the streets if required.

The Information Minister criticised BNP for the gathering of thousands of people when its chief Khaleda Zia was released on Wednesday amid enforcement of social distancing to prevent the spread of the coronavirus.
“BNP manifested nothing other than its utter irresponsibility by allowing gathering of thousands of people,” he said adding that during the release of Khaleda Zia, thousands of  people  gathered in front of Bangabandhu Sheikh Mujib Medical University (BSMMU) hospital, and in front of her residence in Gulshan and on her way to the house.

The BNP did it when the people of the country were staying home and everyone was doing what were possible on his or her part and following the instructions to face the global pandemic of coronavirus, said Dr Mahmud.

“These gatherings happened when all the programmes of the Independence Day and even placing of wreaths at the National Memorial were cancelled,” he added.

Noting that the world is facing the pandemic, he said they do not want to see the political blame-game at this time of disaster. “We rather hope all political parties will stand united to face the crisis. We hope we all, including BNP and other political parties, will remain united beside people and we’ll be able to face this massive disaster with collective efforts,” he said.

The Information Minister said the people of the country responded overwhelmingly to the call of the Prime Minister and are staying at home to prevent the COVID-19 spread.