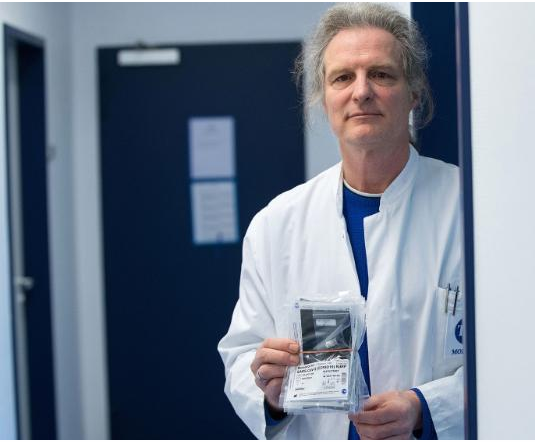 In the first week of January, reports emerged that a mysterious new form of pneumonia had affected dozens of people in China. Some were in a critical condition, and a number had invasive lesions on both lungs.

Thousands of miles away in Berlin, German scientist Olfert Landt was already on alert. For 30 years, he had worked on diagnosing emerging diseases, including Severe acute respiratory syndrome (SARS). He wanted to make a test kit to help doctors diagnose the disease -- and he wanted to do it fast.

Virologists usually wait until the genetic material of a new virus is sequenced to start working on a test. This time, Landt and his 30-strong company TIB Molbiol got started early. By January 9 they had designed their first test kit using SARS and other known coronaviruses as references. Along with scientists from a local university hospital, he designed three kits, meaning once the sequence was published, they could pick the one that worked best.Olfert Landt with his coronavirus diagnostic test kit at his production facility in Berlin, Germany, on March 6, 2020.

On January 11, Landt sent his kit to Taiwan's Centers for Disease Control and diagnostic company Roche in Hong Kong. He didn't know for certain that it would work, and he hadn't even prepared instructions.

Over the weekend, he worked up a manual and emailed it over. "We said, listen, you have six tubes without any instructions," he recalls. "Give them to the test laboratory, you can test patients with this."

In the end, the test he sent over was perfect, he said. On January 17, the World Health Organization (WHO) published Landt's protocol online, making it the first test to be shared by the organization.

Landt estimates he has manufactured four million tests by the end of February, and another 1.5 million each week since then. Each kit -- which includes 100 tests -- has sold for at least 160 euro ($173) each to clients in Saudi Arabia, South Africa, Australia, Europe, with his two adult children helping label and pack the kits. His wife, who has worked for the company for 15 years, is also involved.
"I'm not working for money. I take the money, yes, it's fair, we do good work," he said. "But in the end, we don't need money."
The test kit Olfert Landt designed, displayed at his production facility in Berlin, Germany, on March 6, 2020.

When it comes to stopping the spread of a pandemic, testing is key. If a person is diagnosed, they can be isolated from others and treated appropriately. As WHO Director-General Tedros Adhanom Ghebreyesus said earlier this month: "We have a simple message for all countries: test, test, test."
But nearly three months after Landt first noticed reports of a mysterious disease, countries around the world are still struggling to test for Covid-19, the infectious disease caused by a new novel coronavirus. Some tests are inaccurate, others took a long time to create, and now testing companies are warning they are running dangerously low on materials.

That raises an important question: if a test can be developed so quickly, why are some countries still struggling?
The first designs
In Hong Kong, virologist Leo Poon was also watching the developments unfold in January.

Like Landt, he had worked on emerging diseases for years. In 2003, it was his team of scientists at Hong Kong University (HKU) who identified that SARS, which had emerged the year before in mainland China, was a coronavirus.

"Because we have gone through all these events in the past, we know how important it is to have a working diagnostic test," he said. "That's why we basically tried to get the work done as soon as possible."
But unlike Landt, Poon waited for the sequence.
Dr Leo Poon Lit-man on the University of Hong Kong campus in Pok Fu Lam.
All forms of life have a type of molecule that carries their genetic instructions. In humans, and most life forms, that's DNA -- the genetic material that tells us to grow two legs and walk upright. Instead of DNA, many viruses -- including hepatitis, Ebola, and rabies -- have RNA, or ribonucleic acid, which, like DNA, is a nucleic acid that carries genetic information.

Across the border from Hong Kong in mainland China, scientists were working to identify the RNA of the new virus. According to a report in Chinese news magazine Caixin, the new virus now known as SARS-CoV-2 may have been mostly sequenced as early as December 27.
But it wasn't until January 11, that the sequenced genome was posted on open-source site virological.org on behalf of Zhang Yongzhen, a professor from Shanghai's Fudan University. Chinese authorities shared the sequence on January 12.
Once Zhang shared the sequence, Poon's team started work.

First, they looked at the RNA of the new coronavirus, and decided their test would target parts of the code that were similar to the RNA of the SARS coronavirus -- parts that would be less likely to mutate, as they were essential to the virus.