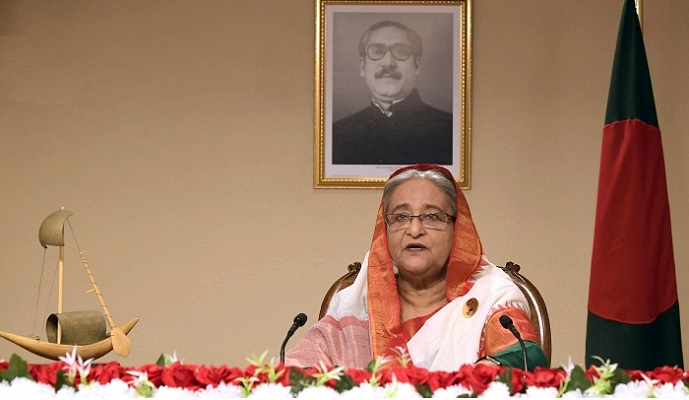 Prime Minister Sheikh Hasina has extended heartiest greetings to the countrymen and expatriate Bangladeshis on the
occasion of the great Independence and National Day of Bangladesh to be celebrated tomorrow.

“I extend my heartiest greetings to the countrymen and expatriate Bangladeshis on the occasion of the great Independence and National Day of Bangladesh,” said the Prime Minister in a message today.

The premier urged all to get united in the spirit of the Great War of Liberation and maintain the continuation of development and democracy by facing any sort of conspiracy.

“Let us transform Bangladesh into a safe and peaceful home for our next generation-this should be our firm commitment on the Independence Day,” she said.

Sheikh Hasina said March 26 is the day of establishing self-identity of Bengalee nation. It is the day of breaking the shackles of subjugation, she added.

On the Independence Day, the Prime Minister recalled with deep gratitude the Greatest Bangalee of all times, Father of the Nation Bangabandhu Sheikh Mujibur Rahman, under whose undisputed leadership we have earned our coveted independence.

She paid tributes to four national leaders, who steered the War of Liberation in the absence of Bangabandhu.

She also paid her deep homage to the three million martyrs and two lakh dishonored women of the War of Liberation and all the valiant freedom fighters including the wounded ones. She extended sympathies to those who had lost their near and dear ones, and were subjected to brutal torture during the Liberation War.

She also recalled with gratitude our foreign friends who had extended their whole-hearted support and cooperation for the cause of our liberation.

The Prime Minister said the Bangalee nation had fought against oppression and deprivation of Pakistani rulers for long 23 years under the leadership of Bangabandhu.

They were compelled to hold General Election in 1970, she said, adding that Bangladesh Awami League led by Bangabandhu won absolute majority in the election. But the Pakistani rulers adopted repressive measures instead of handing over power to the majority party in a democratic way, she added.

Sheikh Hasina said the Pakistani occupation forces unleashed a sudden attack and started killing innocent and unarmed Bangalees on the fateful night of March 25, 1971 and killed thousands of people in cities and towns including Dhaka.

“Under the brave and dauntless leadership of Bangabandhu, the ultimate victory was attained on December 16, 1971 after a 9-month of bloody war,” she said.

The premier said the independence earned through supreme sacrifices of millions of people is the greatest achievement of Bangalee Nation. To ensure that this achievement remains meaningful, all have to know the true history of our great Liberation War and retain the spirit of independence. The spirit of the Liberation War has to be passed on from generation to generations, she added.

Being imbued with the spirit of the freedom struggle, the Awami Leaguegovernment has relentlessly been working to develop the country since 2009, she said.

“We have been accomplishing the unfinished tasks of the Father of the Nation. Bangladesh had achieved outstanding socio-economic progress in the last 11 years. It has fulfilled the requirements for graduating from least developed country to developing one,” she said.

Sheikh Hasina said the present government is maintaining ‘zero tolerance’ policy to tackle militancy, terrorism and drug-menaces. For the first time in the world, Bangladesh has formulated a 100-year plan named ‘Delta Plan 2100’, she said, adding that Bangladesh is one of the five top countries in the world in economic development and ninety percent of development works are financed from our own resources.

She said by establishing the rule of law, the government has executed the verdicts of the trial of the killers of Bangabandhu.

As per the pledges to the people, the trials of war criminals are going on and verdicts are being executed, she said, adding that the people are now getting benefits of development as Awami League has continuously been in power for third consecutive time.

By implementing our ‘Vision-2021’, ‘Vision-2041’ and ‘Delta Plan-2100’, the government has been working relentlessly to build a hunger-poverty-free developed-prosperous Bangladesh as envisioned by the Father of the Nation, she said.

“Bangladesh is moving forward and it will go on. Today we have become a self-respecting country in the world holding our heads high,” said the Prime Minister.