Widow of freedom fighter in ordeal! 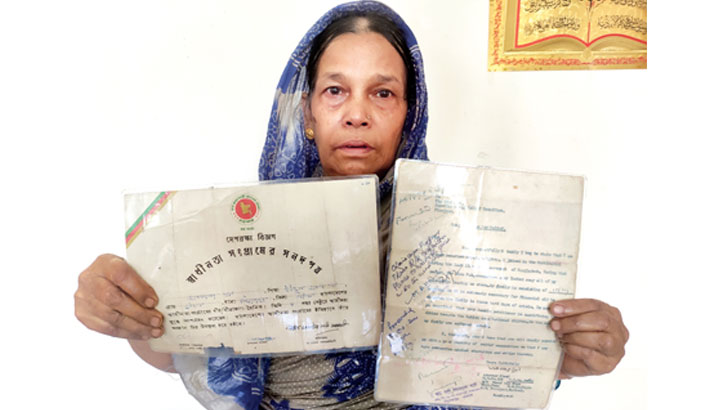 There goes a proverb that truth speaks itself. Perhaps it does not happen now as mere truth has no value if it is not corroborated by evidence.   Everything depends on papers and documents.

Exactly the same happened to Saleha Begum, a widow of late freedom fighter Akabbar Khan of Pirojpur. The poor widow has been trying to get the recognition of the government over the last four years.

Hailing from Tona union of Pirojpur Sadar upazila, the widow over sixty years of age has taken up the job as a maid to survive in the capital’s Jurain area.

She is deprived of allowance of freedom fighter as her husband was not listed in the register of the government.

“My husband went to India from his home Pirojpur to receive training there. After receiving training he came back to Bangladesh. We heard he fought in Sarankhola and Sundarbans under sector 9.”

“After the liberation we moved to Dhaka due to extreme poverty in my family. We did not know the freedom fighters will be treated with honor and allowance will be given to them. My husband never wanted to register his name, not even when the Awami League government launched the registration though his co-fighters did.”

The poor woman said only a few months before his death, he could be convinced to apply, but before the process began, he died just four years ago. “After his death, we have gone from to door to door and are being cheated. How can we convince the government?” she posed a question.

Manan Dardi, a recognized freedom fighter of Pirojpur said, “Akabbar Khan met me Hasnabad of Bashirhat in India where he went to receive training. I received training at Bihar and returned to Bangladesh. He also came back to join the war. But I cannot say for sure where he fought but all I knew he fought.”

His co-fighter can tell the best and his family should find them out. Certainly, some of his co-fighters are alive, he also said.

For being not recognized, he is squarely responsible as during his lifespan he did not attempt to get his name listed. The government has published at least five lists including Lal MuKtiBarta, Jatiya Talika and other lists. He married two times and due to quarrel between two wives they may have lost some necessary papers, he added.

According to the appeal form, he fought in sector 9 under Major Ziauddin in May 1971 with 303 riffle.

Sohag Hossain, son of the freedom fighter, said, “We have appeared before the scrutiny team with certificate of Desh Rokkha Bivag by defense division singed by general MAG Osmani. But our appeal was rejected by the authorities.”

Director General of Jatio Muktijoddha Council, Md Jahangir Hossain said: “if there is anyone left the way you said. You send her to us, we will take legal steps.”