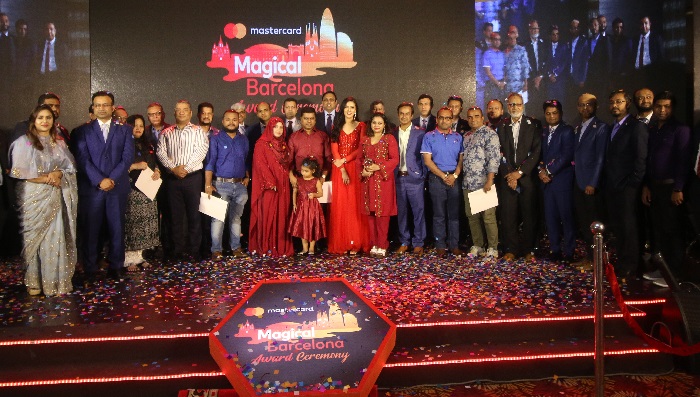 Mastercard, a technology company in global payments sector, announced the winners of its ‘Magical Barcelona’ campaign at a city hotel in the capital on Thursday.

The award giving ceremony marked the culmination of the two-month campaign, launched to bolster domestic and overseas retail transactions, provide cardholders the opportunity to win exciting prizes by making purchases with their Mastercard credit, debit and prepaid cards throughout the winter season.

AKM Fazlul Haque won the ‘Dream Prize’ of an all-expenses paid, four-days-three-nights trip for two to Barcelona in Spain.

Winners received a range of exciting prizes, including travel packages to other exciting destinations, and attractive gift items, including dining vouchers and lifestyle gift vouchers.

During the campaign period -- from December 1, 2019 till January 31, 2020-- all Mastercard cardholders earned points by making at least 4 transactions with their Mastercard credit, debit or prepaid cards.

The cardholders with maximum points received prizes from Mastercard.

In his Speech, Syed Mohammad Kamal, Bangladesh Country Manager for Mastercard said, “The Magical Barcelona campaign is another step, undertaken to inspire Mastercard cardholders to explore the world and be rewarded with priceless experiences.”

“Mastercard values experiences and the ‘Dream Prize' of four-days-three-nights trip for two to Barcelona, Spain is truly a memorable one. Mastercard strives to introduce more such campaigns in its efforts to bring cardholders closer to their passion,” he added.