A park only for the ‘eligible’ few! 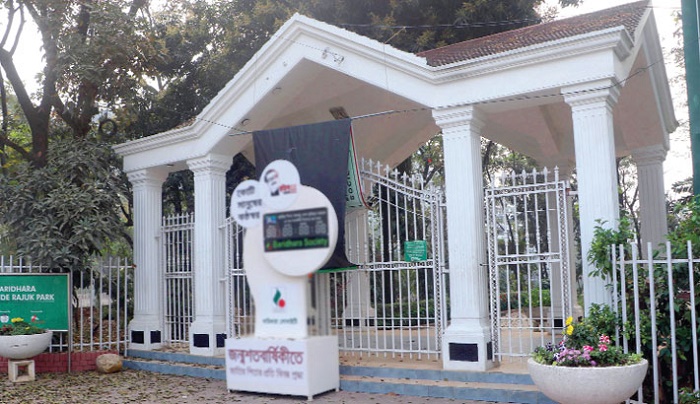 The gate of Baridhara Park in the city is seen under lock and key. The park is open for the members of Baridhara Society and foreigners. Access to the park is allegedly restricted to commoners. —MD Nasir Uddin.

In the midst of traffic chaos and growing concrete jungle that suffocating the life in the capital, curiously one prime park in an up-market area is earmarked for only the few specials —- the foreigners and those identified as belonging to the society’s upper crust.

Strange it might be, but it is the case for the tranquil Baridhara Lakeside RAJUK Park with a long walkway and splashes of green facing Baridhara-Gulshan Lake.

The security guards have to be satisfied about ones status before being allowed into one of the most well-kept Dhaka parks in Baridhara upmarket area, where most of the diplomats live, is thus for the fortunate “eligible” few!

The Society members can use it for 24-hours, but others are not allowed to enter the park, said sources in the area, which a Society official denied. But the experience of this correspondent and others contradicts the official’s stand.

Mahadi Hasan Bahdon, a visitor of the park said, “Before visiting this park today, I knew the park belongs to the City Corporation or RAJUK and was open for all. But when I approached the gate, the security guards refused to let me in,” adding that only Baridhara Society members had access to the civil facility.

“But when I introduced myself as a journalist, the security guard telephoned his superior and allowed me to go in finally on some conditions,” he said, adding that he would have to go back if he was not a newsman. Shofiq Ul Huq, member (Estate and Land) of RAJUK told the daily sun: “The Park belongs to RAJUK and open for all. Creating any barrier to enter it is illegal. I don’t know whether any authority is creating obstacles and I can tell you once I investigate the matter.”

A signboard hanging on both the gates loudly says “For Barishara Society members only.”The gates are always locked, this correspondent found during a visit to the park.

“It is open for all and the Baridhara Society has not imposed any restriction. Though we maintain the park with the subscription from our members, but we don’t take any entrance fee.  You see we have other parks where urchins play. If security guards restrict anyone’s entrance, it is unfortunate. Some time the restriction is imposed strongly due to maintenance job,” said Abdur Rauf, general secretary, Baridhara Society.

Talking to daily sun, Md Monir who was guarding the front gate of the park said, “Members of Baridhara Society and foreigners are allowed to use it 24 hours, but for others from 5 am to 10 am in the morning and 2 pm to 5 pm in afternoon.”

Security supervisor of the park, Babul Khan said, “The society has 19 guards and five supervisors for maintenance. We restrictively allow non-Society members.”

This correspondent was also barred from entering the park first and went around the park from 2 pm to 3.30 pm on Sunday, where only foreigners and members of Society were seen using the green lake-side facility.

When Contacted, Dhaka North City Corporation’s Superintending Engineer (Environment, Climate and Disaster Management Circle), Dr Tariq Bin Yousuf, said, “We have written to RAJUK to hand over the authority of the park to us. We will then maintain the park.”