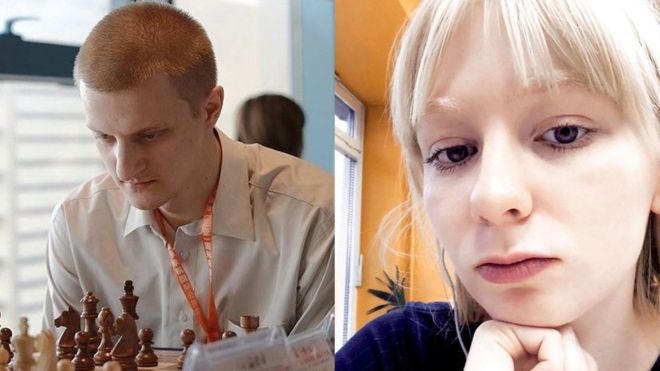 A 27-year-old Ukrainian chess champion and his girlfriend, 18, have been found dead in their Moscow flat, apparently poisoned by laughing gas.

Russian investigators reported the deaths, without naming the pair, and said there were no signs of foul play.

Bogdanovich was a speed chess champion.

Vernigora was also a professional chess player and was studying at Moscow State University.

The Ukrainian sports website sport.ua says Bogdanovich was a grandmaster from Odessa who won the Ukrainian Under-18 championship and various chess awards at international tournaments.

Russian chess website chess-news.ru says that in 2015 he was rated eighth in the world for speed (blitz) chess.

Reports say Bogdanovich drew much criticism recently for representing Russia in an internet chess match against Ukraine, which he won.

Sport.ua quotes a Facebook post from him (in Russian) about that, in which he argued that playing for Russia was good for business, that he was living as a guest in Russia and being treated well, and this was his small contribution to ending the Russia-Ukraine conflict.

Nitrous oxide was first used as an anaesthetic in 1844, but is now being used as a recreational drug and has been linked to a number of deaths. It can also cause breathing difficulties, dangerously increased heart rate and burns.