What is Super Tuesday and how does it work? 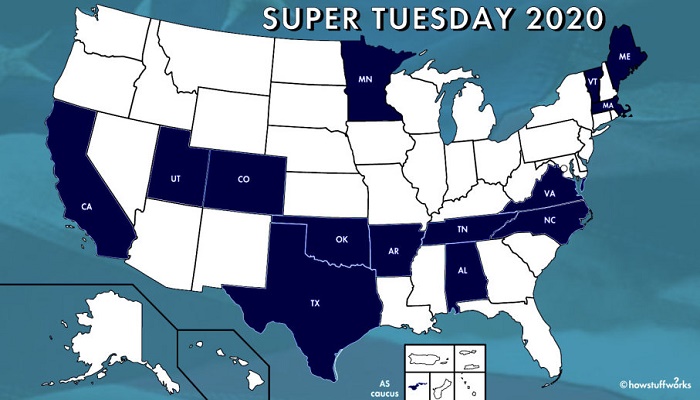 Voters across America are preparing to take part in the biggest day of the 2020 election so far.

More than a year after the first Democratic candidates joined the race to take on Donald Trump, we've now reached Super Tuesday.

Fourteen states will vote on which Democrat they want to run in November's election. Bernie Sanders is in the lead after the early contests.

By Wednesday, we could have a clearer picture of who the nominee will be.

Democrats across the US have been taking part in a series of caucuses (essentially party meetings, where you vote publicly at the end) or primaries (secret ballots) to pick their preferred candidate.

Bernie Sanders's success has come as a bit of a surprise. The Vermont senator lost out to Hillary Clinton in the 2016 race, but he isn't a typical Democrat by any means (in fact, he sits as an Independent in the Senate).

He's a staunch left-winger, so may struggle to convince the party's moderates if he becomes the candidate. He's also 78, and suffered a heart attack in the autumn. But he's proven extremely popular in the primaries so far across many age groups and ethnicities, and all the momentum is on his side.

The handful of moderate Democrats running have split the vote, so it's made it hard for any of them to break out (and this has helped Sanders build up a lead).

One of them, former vice-president and early favourite Joe Biden, underwhelmed before winning convincingly in South Carolina on Saturday.

Pete Buttigieg, the former mayor of South Bend, Indiana, didn't build on his early momentum before dropping out on Sunday. His voters may now turn to Biden, whose chances of becoming the nominee appear to have improved hugely in recent days.

Sanders does not have the left lane to himself either - Elizabeth Warren, the experienced Massachusetts senator, shares several of his policy objectives but has not lived up to expectations.

So might any of these candidates win the election in November? Honestly, it's too close to call, and there are so many unknown factors.

Why does Super Tuesday matter?

It's all about the delegates.

Later in the summer, those delegates will then vote for their candidate to become the Democratic nominee. The target for any candidate is to reach an unbeatable majority of 1,990 delegates.

This is where Super Tuesday comes in.

Up to now, only 155 delegates have been awarded in four states. On Super Tuesday, a massive 1,357 delegates will be distributed, and 14 states are voting. The two most populous, California and Texas, will take part - the former for the first time on Super Tuesday.

Here's what is at stake in each state - the smallest to the largest - with some bonus nuggets of trivia thrown in.

Who will do best? A no-brainer: Bernie Sanders. He is one of the state's senators, after all.