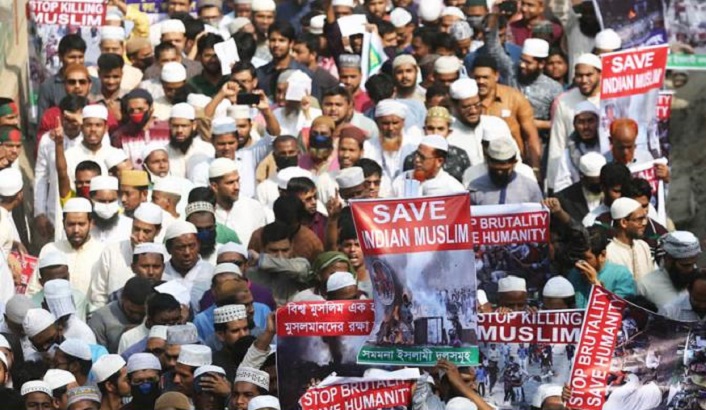 Islamic parties of Bangladesh have demonstrated protesting crackdown against arson attack at mosques, madrasas and oppression on Muslims in India.

A protest rally was brought out by the like-minded Islamic parties from Baitul Mukarram National Mosque to Bangladesh Nationalist Party's (BNP) Naya Paltan office in the capital after Jummah prayers on Friday.

The protesters said if government fails to cancel the invitation, they will demonstrate by donning a shroud in front of the airport when Modi arrives.

Awami League General Secretary Obaidul Quader must be sent to India if he does not take back his words supporting the invitation, they voiced.

The next program schedule for the protest will be announced after a meeting, said Nur Hossain Kasemi, vice-president of Hefajat-e-Islam.

Police was present throughout the demonstration, even when the protesters burnt an effigy of Modi.

Death toll in worst violence in decades in India's capital New Delhi rises to 42 till Friday.