Chinese space reveals what it's like on far side of moon 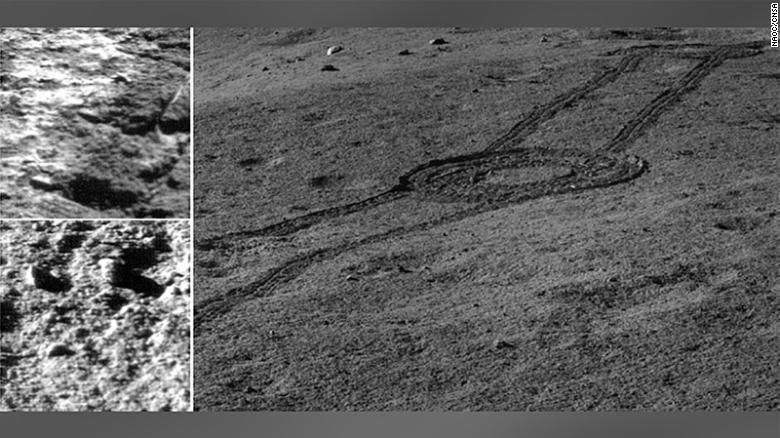 China's Chang'e-4 mission, the first to land on the far side of the moon, is unveiling lunar secrets one layer at a time, according to a new study.
Chang'e-4 landed in the Von Karman crater on January 3, 2019, after which it deployed a lunar rover named Yutu-2. The rover's purpose was to explore the South Pole-Aitken basin, the oldest and largest crater on the far side of the moon, which is 1,553 miles in diameter.
The rover has since discovered that the crater is full of loose deposits of pulverized rock and dust, 39 feet thick, similar to what Apollo astronauts discovered on the nearside of the moon.
Equipped with Lunar Penetrating Radar, the rover was able to investigate the moon using radio signals to a depth of 131 feet beneath the lunar surface -- three times the depth that China's previous mission, Chang'E-3, was able to explore. CE3 landed on the near side of the moon in 2013.
"The subsurface at the CE-4 landing site is much more transparent to radio waves, and this qualitative observation suggests a totally different geological context for the two landing sites," said Li Chunlai, research professor and deputy director-general of the National Astronomical Observatories of the Chinese Academy of Sciences, who led the study published Wednesday in the journal Science Advances.
The radar revealed embedded boulders in a variety of sizes along with porous, granular material. This likely due to the fact that the moon was frequently hit by meteors and other debris during the early, chaotic days of our solar system.
When the moon is struck by an object, it sends up a wave of material elsewhere on the moon. Over time, the cratered surface we see now became the top layer, with alternating layers of boulders and loose, fine grain material buried beneath.
The subsurface seen by Yutu-2 radar on the farside of the moon.
This data was gathered during the first two days the mission was operating on the lunar surface, creating the first electromagnetic image of the subsurface of the farside of the moon.
"This work shows the extensive use of the Lunar Penetrating Radar could greatly improve our understanding of the history of lunar impact and volcanism and could shed new light on the comprehension of the geological evolution of the Moon's far side," Li said.
Impact craters are how researchers can learn more about the moon's evolution and how it formed.
Researchers have been trying to understand the composition of the lunar mantle, which exists between the crust and the core, and when asteroids and other objects collide with the moon, the crust is cracked and pieces of the mantle reach the surface.
Yutu-2 continues its investigation of the moon's farside and the mission team is looking at the possibility of returning samples to Earth.