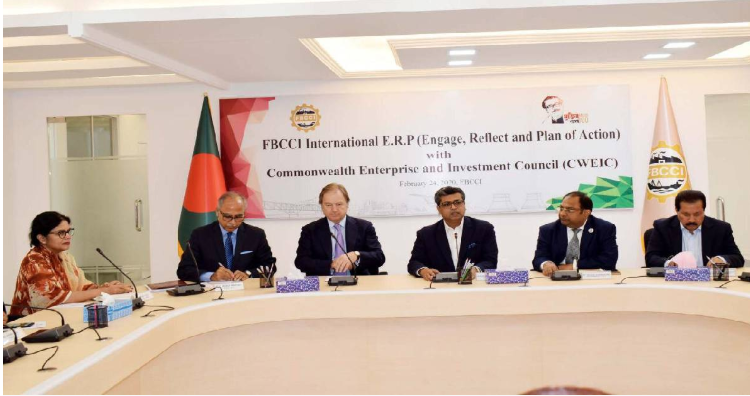 FBCCI President Sheikh Fazle Fahim on Monday urged the Commonwealth countries from the Asia-Pacific to Africa region to come to Bangladesh with investment to tap the potentials of the growing South Asian economy.

He made the call during a meeting with the Deputy Chairman of Commonwealth Enterprise and Investment Council (CWEIC) Rt Hon Sir Hugo Swire at the Federation Bhaban in the capital city.

CWEIC is the Commonwealth’s business network with over 90 business and government strategic partners from 27 countries and territories. It has a mandate to facilitate trade and investment throughout the 54 member nations of the Commonwealth.

The FBCCI boss said the United Kingdom, which has recently come out from the European Union, should also come forward to invest more in Bangladesh. The UK is one of the top export markets for Bangladesh that earned $4.1 billion in 2019 fiscal year from Britain.

While Bangladesh’s major Commonwealth trade partners include the UK, Malaysia, Singapore, India, Australia and Canada with a total $23.15 billion of imports, he said Bangladesh has a huge potential to increase its trade volumes by bringing other countries of the 54-nation platform under its domain.

Explaining the overall growth and development in Bangladesh over the last one decade, Fahim said Bangladesh is hungry for overseas investment in various sectors, including infrastructure, leather and leather goods, information technology, power and energy, heavy and light engineering, tourism, furniture and pharmaceuticals.

He said Bangladeshi businesses, especially manufacturers, are ready to form joint venture companies with UK’s ones while African nations could be a destination for Bangladeshi products with the help of the CWEIC.

Mentioning the Unctad World Investment report, the FBCCI chief told the CWEIC deputy chairman that under the leadership of Prime Minister Sheikh Hasina the FDI growth was 67.94 percent in 2018 from 2017 with prudent diverse investments from the UK, India, Singapore, the USA, China, the Netherlands Canada, Korea, Norway, Saudi Arabia, Japan and others.

He said operations of some 500 Chinese and more than 200 Japanese companies in Bangladesh prove that Bangladesh is a lucrative investment destination.

He said the FBCCI, which is a platform of 500-plus trade bodies, is eager to work more closely with the CWEIC to project Bangladesh’s investment scenario and showcase Bangladeshi products in the potential markets of the Commonwealth countries.

Swire, also a former UK Minister of State for the Foreign and Commonwealth Office, invited Bangladeshi businessmen to join the delegation by the FBCCI to the Commonwealth Business Forum in Rwanda in June alongside the Commonwealth Heads of Government Meeting (CHOGM).