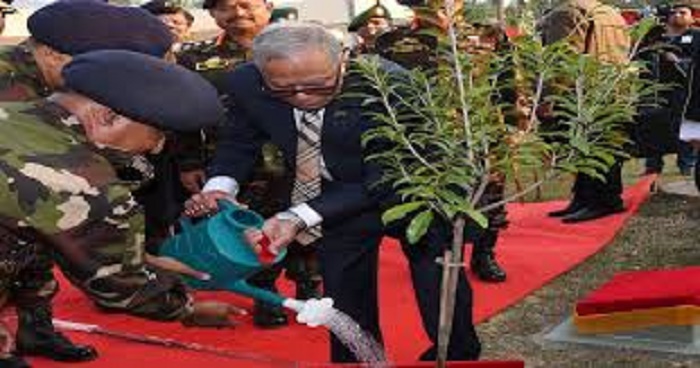 President Abdul Hamid on Sunday urged all members of the Armed Forces to put special emphasis on acquiring necessary technical and professional knowledge.

He made the remarks while delivering his speech at the national standard parade programme at the parade ground of the Artillery Centre and School.

"Technology is intimately involved with modernisation. In order to keep up with modern technology, all members [of the forces] from now on will have to put special emphasis on acquiring the necessary technical and professional knowledge," he said.

Hamid said the army has always engaged in nation building activities in addition to its core activities.

He said the responsibility has been given to the army to implement mega projects like the construction of Padma Bridge for their professionalism.

President Hamid said members of Bangladesh Army have brightened the image of Bangladesh in the world through their dedication and professionalism in establishing world peace.

"Armed forces will have to contribute to the welfare of people for the country and nation," he said.

The President said the incumbent government has continued the process of modification and redesign of the army's organisational structure as part of the implementation of the "Forces Goal-2030" in light of the defense policy made by the Father of the Nation Bangabandhu Sheikh Mujibur Rahman.

Various steps have been taken to improve the artillery regiment as part of the advancement of Bangladesh Army, he added.

President Hamid, the command-in-chief of the armed forces, said the army will have to be always ready to sacrifice for the country alongside protecting the sovereignty.

He also signed the visitor's book after the programme.

Chief of Army Staff General Aziz Ahmed received the President after he arrived at the parade ground.

The President yesterday planted a sapling in front of the VIP Complex of AC&S on the occasion of conferring of national standard.

Members of Parliament, secretaries concerned to the President, and Director General of Bangladesh Ansar and VDP Major General Kazi Sharif Kaikobad, among others, were present during the programme.