Swarochish Sarker: Tribute to a Lexicographer 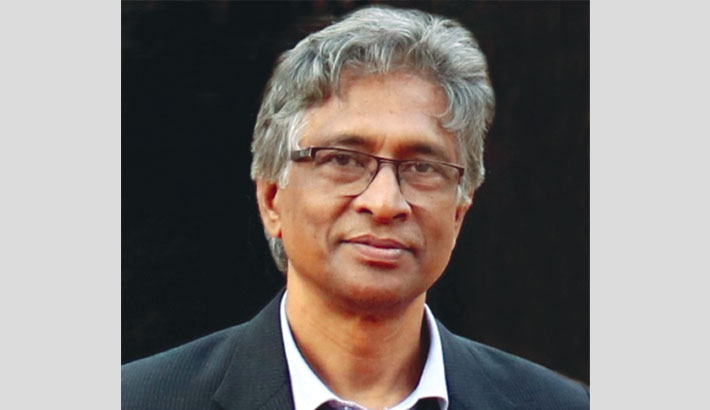 Swarochish Sarker (born: 23 October 1969)  the prominent lexicographer, linguist and prolific researcher  has been nominated for recently announced Bangla Academy Literary Award 2019 in essay and research category. This award is indeed the recognition of the untiring effort of a true researcher. Swarochish Sarker, a popular professor of the Institute of Bangladesh Studies of Rajshahi University, has possessed diversified areas of interest viz.language, literature, folklore and socio-cultural traditions of Bangladesh. He has basic research in the field of the liberation war of Bangladesh and biographical literature. His contribution to the research of Bangla language as well as Bangladesh Studies is vivid.

Swarochish Sarker was born in the village of Charbaniari in Chitalmari Upazila of Bagerhat district. His father Swarupendu Sarker was a prominent Kabial (balladist) of Bangladesh. Prof. Sarker’s elementary and secondary education was completed from his village school, while higher secondary and Graduation (Honors) from Bagerhat PC College. Completing M A in Bangla from the University of Rajshahi, he again admitted to that university as a researcher under the fellowship of the Institute of Bangladesh Studies (IBS).

He started his career as a lecturer at Barguna Mahila College followed by an officer of the Bangla Academy from 1992 to 2000. He contributed to editing and publishing the manuscript of many important books in Bangla Academy. In 2001 he joined to the IBS as an Assistant Professor. Later, he served as the director of the IBS from 2015 for three consecutive years.

The number of books written and edited by Swarochish Sarker is thirty-five. Of these, the number of research books is fourteen, translated book is one, edited books including dictionary is nineteen, and the number of transcribed books is one. The number of journal articles and book chapters he composed is more than half a hundred. He has been highly praised for his work in editing three volumes of Bibartanmulak Bangla Abhidhan[Evolutionary Bangla Dictionary] along with eminent researcher and linguist Golam Murshid, and two volumes of Bangla Academy Pramita Bangla Bhasar Byakaran [Bangla Academy Standard Bangla Language Grammar]. In both books, he served as the Associate Editor. In addition, he edited another six dictionaries from Bangla Academy and Buddhist Welfare Trust. He is one of the members of the editorial of the Bangla Academy Standard Bangla Spelling Rules, Revised Edition (2012).

Among the basic research books of Dr. Sarker, Kabigan: Itihas o Rupantar [Kabigan: History and Transformation] is a masterpiece.  This book, written through extensive fieldwork, has revealed many lost and unknown facts about the cultural history of Bengal. His another book titled Ektare Bagerhat: Muktijuddher AnchalikItihas [Bagerhat in Nineteen Seventy-One: Regional History of the War of Liberation] written by field surveycould be anexemplary manifestation of academic objectivityfor young researchers in the study of Liberation War. Furthermore, some of his books titled Aspriwata Bishayae Rabindranath [Rabindranath about Untouchability], Akaran Byakaran[Grammar for Nothing] and Sarbastare Bangla Bhasa: Akangkhxa o Bastabata [Bangla Language at Every Level: Longing and Reality] are widely read.

The writer is an Associate Professor, Bangladesh and Liberation War Studies, Noakhali Science and Technology University, and a post-doctoral fellow of the University Grants Commission of Bangladesh (UGC).