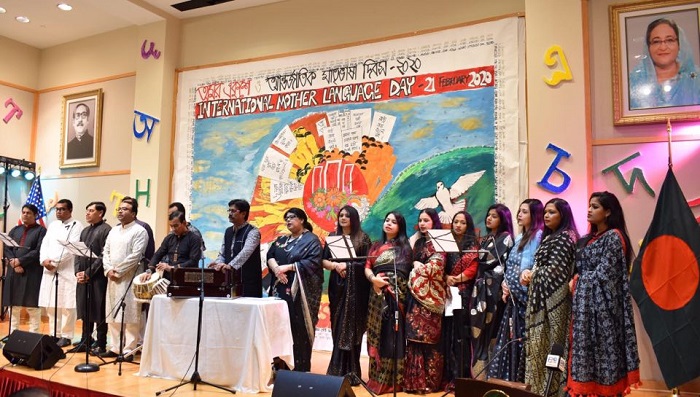 The Shaheed Dibash and the International Mother Language Day were observed at Bangladesh embassy in Washington DC offering profound respect and gratitude for the martyrs of the 1952 Language Movement.

On this day 68 years ago, Salam, Barkat, Rafique, Shafique, Jabbar and many others laid down their lives in Dhaka city establishing Bangla as the state language of the erstwhile Pakistan.

The day was also observed as the International Mother Language Day declared by the UNESCO on November 17, 1999.

Displaying linguistic diversity and multilingualism in a brilliant fashion, artists from Bangladesh and 11 foreign countries sang and danced during a cultural soiree at Bangladesh embassy in observance of the International Mother Language Day.

Speaking on the occasion, Bangladesh Ambassador to the USA Mohammad Ziauddin said the dissemination of mother languages encourages linguistic diversity and multilingual education throughout the world.

He said the respect for each other’s language inspires international solidarity based on understanding, tolerance and dialogue.

On UNESCO’s proclamation of the International Mother Language Day, the Ambassador said Bangladesh as the pioneer of the resolution has a scared obligation not only to protect Bangla but also all other languages.

In observance of the ‘Shaheed Dibash’, officials and employees of the embassy and their spouses led by Ambassador Mohammad Ziauddin paid glowing tributes to the Language Movement heroes by placing wreaths at the altar of the Shaheed Minar at one-minute past zero hour.

They stood in solemn silence for a while as a mark of deep respect to the memories of the language heroes.

In the afternoon, Secretary of State of the District of Columbia Kimberly Bassett formerly inaugurated the newly built Shaheed Minar on the embassy premises and placed wreaths at the altar.

In the morning the Ambassador hoisted national flag at half-staff.

Special prayer was offered seeking divine blessings for the martyrs of the Language Movement and the Liberation War.