Rizvi, 9 others hurt as police charge baton on BNP’s procession in city 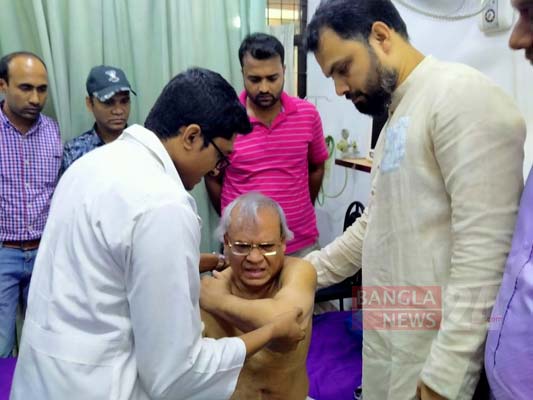 At least 10 leaders and activists of the BNP, including its senior joint secretary general Ruhul Kabir Rizvi, were injured as police reportedly charged baton on them when they brought out a procession in capital's Mirpur area demanding release of party chairperson Begum Khaleda Zia on Saturday morning.

Leaders and activists from Dhaka Metropolitan BNP, Jubo Dal and Chhatra Dal gathered at Mirpur 6 and marched toward Mirpur 11 where the procession was stopped by the police. The police used batons to break up the procession, BNP alleged.

Talking to reporters later, Rizvi said they brought out the procession in a peaceful manner demanding their chairperson’s release as she is very sick.

“It’s not an anti-government procession, but police suddenly attacked it and charged batons to foil it. Many of our leaders and activists, including me, were injured,” he claimed.

However, Mostak Ahmed, deputy commissioner (Mirpur Division) of Dhaka Metropolitan Police (DMP), said they did not attack the procession as BNP leaders and activists themselves left the spot seeing police.

An HC bench of Justice Obaidul Hassan and Justice AKM Zahirul Huq is scheduled to hear the petition on Sunday next. Khaleda has been in prison since February 8, 2018 as she was convicted in graft cases.