Delhi to Kashmir: What happens when pen pals reunite 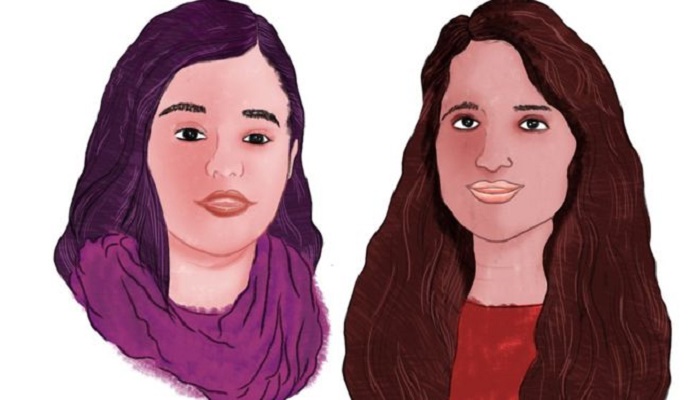 Duaa Bhat is a 17-year-old girl in Indian-administered Kashmir, one of the most heavily militarised zones in the world. Two years ago, she became pen pals with Saumya Sagarika, 18, from the country's capital, Delhi, in a bid to understand the different worlds they were growing up in.

The army has been deployed in Kashmir, India's only Muslim-majority region, since the rise of an armed rebellion in 1989. As Saumya discovered through her letters, Duaa's studies were interrupted by strikes and school shutdowns. The problem was often compounded by the Indian government who would deliberately shut down or "snap" internet and social media.

Then, in August last year, the government removed Kashmir's special status - which provided a degree of autonomy under article 370 of the country's constitution - and imposed a communication clampdown. Schools were closed, thousands including politicians were placed under detention, and phone lines and internet were blocked.

A warm hello from Delhi. How are you? How is everyone in your family? We didn't really continue our promise of staying "pen pals" after our last round of letters, but I am very happy to restart our conversation.

A lot must have changed in your life and the circumstances around you in the past two years too. I got to know that Section 370 was removed from Kashmir a few months back and for some time telecommunications were snapped there, and internet is probably still not working.

I am sure the situation must have changed. I hope everyone is safe there?

A chilling salaam from Kashmir.

Chilling because it is really, really cold here these days. I am good and, Allhamdullilah, everyone in my family is doing good. We didn't continue being pen pals because the internet here is down most of the time and staying in touch with anyone outside the valley is a task in itself.

I was really happy to know that you've started college and your studies are going well. People like me have suffered the most in the past few months. We used to study ourselves with some help from the magic of the internet. Only the Almighty knows how we've completed our syllabus in time for exams.

People here are not happy with the removal of our special status. Personally, I feel depriving people of even talking to their near and dear ones is a violation of human rights.

Saumya, most people, including myself, do not understand the protests in the rest of the country. News channels here do not give us enough information to understand what the CAA (Citizenship Amendment Act) really is. Can you brief me about them?

In December, India's parliament passed the CAA, which offers amnesty to non-Muslim illegal immigrants from the three nearby Muslim-majority countries - Pakistan, Afghanistan and Bangladesh. It sparked massive protests as many considered it discriminatory against Muslims, something the government denies. Saumya, a Hindu, joined the hundreds of mostly Muslim women in a Delhi street protest against the new citizenship laws.

It is quite cold in Delhi too but the mood is really hot.

A few days back, I went to the protest at Delhi's Shaheen Bagh. Women have been protesting against this act there for the past 26 days. These women are not university professors or activists but homemakers, women who remain in purdah, who have stepped out on to the streets to protest. They are fighting this battle so their children are able to lead their lives in peace.

After witnessing the enthusiasm among people at Shaheen Bagh, I'll say people are prepared to fight this battle for our rights.

In your last letter, you wrote that you'd heard slogans like, "They wanted Kashmir to become like India but have made India into Kashmir", were being chanted in Delhi. You are 100% right.

Since this protest movement started, all of Delhi is feeling like Kashmir. Like internet/phone shutdowns, section 144 (curfew) being imposed, stone-throwing and police lathi-charge (using long batons) during protests. So I can say that today I understand Kashmir and the situation facing people living there quite well.

From what you said about CAA, I feel we are going back in time instead of moving forward. I still can't believe that even in the 21st Century some people discriminate against others on the basis of caste, religion and, in some parts of society, even gender.

These protests are a proof that people still believe in taking a stand for each other and that humanity is still alive. Unlike other places in India, Kashmir has been really calm about this act. In our hearts we know this act is wrong but these days we Kashmiris couldn't care less about what's happening outside the valley. Our voices, our rights have been neglected in the past and are being neglected right now.

A couple of days ago, a Niti Aayog (a government think tank) member VK Saraswat defended the communication ban and he went as far as saying that Kashmiris do nothing but watch "dirty films" online. Even though he apologized later, these remarks cannot be just thrown out of our minds. Do people there really think that way about us? No one is talking about the problems we are facing right now due to the internet ban. Are we really invisible to the rest of the country?

Religious identities come up repeatedly in Saumya and Duaa's letters. In 1989-90, at the start of the rebellion, hundreds of thousands of Hindus - referred to as Pandits - were terrorised into leaving by Muslim militants. It tore apart the centuries-old harmony that existed between the two communities.

I feel that people here consider Kashmir a precious property of the country and don't give any importance to its people. Just last week, there was a discussion on the film Shikara on TV. The film is based on Kashmiri Pandits. There has been no discussion of their plight for the past 30 years here. And I don't think that people will go to watch this film or talk about it even now.

Through our letters I have been able to understand a lot about Kashmir and Muslims, which is different from common perceptions. We have lots of family friends who are Muslim but are unable to discuss such issues with them openly, lest we offend them. This CAA issue motivated me to protest, even though I am a Hindu.

As I have understood Kashmir through your letters, it has removed my apprehensions and made me even more curious about Kashmir and Kashmiris. Earlier I was afraid because of the image created by society and the media. But after our conversations, I am excited to go to Kashmir to understand and experience it myself. Is the Kashmir valley open for people from outside now?

I am writing this letter not from Kashmir, but from one of the most holy cities of the world - Mecca, Saudi Arabia. It's an amazing feeling to watch Muslims from all around the world come to pray here.

I feel glad that you know the truth about Kashmir. The valley is open for tourists now (officially) but for us Kashmiris it was and will always be open for the people outside.

You know there is a place in the Khanyar area of Kashmir, where worshipping places of different religions are located on one hill. At the bottom is a Gurdwara (Sikh temple), in the middle a shrine and at the top a temple. My mother's maiden home was near that area and they had Pandits as neighbours. In my childhood, my mother used to tell me various stories about the brotherhood between different communities.

Kashmir is a really beautiful place to live and I pray to the Almighty in this holy city of Mecca to make Kashmir a peaceful place again and to restore the brotherhood that was lost. I'm closing this letter with the hope that my dua (wish) comes true and you will come to Kashmir to meet me.

With lots of love