Language Movement and Emergence of Bangladesh 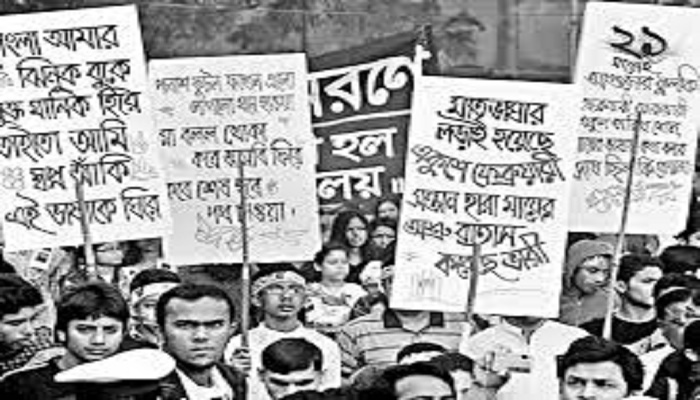 The 21st February is a land-mark day in the history of Bangladesh, a day that we celebrate every year with fondest love and reverence to the language martyrs who took active part in the language movement for our right to mother tongue and establish its dignity and honour foiling all attempts of cultural aggression by our number one enemy, the Pakistani military junta. Right to speak in mother tongue and to use it as official language has been recognized by the United Nations Organization since its foundation comprising of different nations either big or small.

If we look back in the pages of history, we can have enough records to find that the state of Pakistan came into being on the consensus of brotherly and peaceful co-existence on mutual trust. But as time was going on, to the utter surprise of our people, the so-called west Pakistan colonized East Pakistan now called independent Bangladesh with tyranny causing disparity in all sectors of governmental affairs. In continuation of this aggressive policy, Mr. Jinnah, their Governor General of Pakistan, the proponent of the absurd and obsolete Two Nations Theory came to East Pakistan (Bangladesh) and irresponsibly declared Urdu to be the state language of the then Pakistan without caring much for the democratic and freedom loving minds of the people of our land. He could not understand that the basis of the state can by no means be the use of force but it is the will of the people: Vaux populi, Voux deid i.e. the voice of people is the voice of God. By this authoritarian declaration he sowed the seed of the first conflict or he orchestrated the stage of the Second Divide after the Great Divide of the subcontinent by the British as India and Pakistan. The brutal action and colonial master- like attitude of the Pakistani rulers made us believe that they were not our friends but masters. Our perception became clear like broad daylight as Rudyard Kipling said, that the east is east and the west is west and the twin shall never meet.

However, no sooner had he (Jinnah) declared his statement in favour of Urdu, Dhaka the political and cultural home of East Pakistan (now Bangladesh) witnessed huge protest with shouting slogans and procession after procession in every nock and corner. It was the great historic day 21st February 1952 the Pakistanis set their police and other forces against those who rose to protest for Bangla instead Urdu. They gunned down many protesters. As a result, Salam, Barkat, Refique Jabbar and others fell down dead and became martyrs. Our valiant language movement soldiers defied bayonets and bullets of the enemies for the love of their dear mother tongue, Bangla. This great sacrifice for the cause of their language has immortalized them in our national history where their names are written in letters of gold. Their dedication has ennobled them because it was selflessly done for the interest of the nation.  That is why it is said,

“Only the action of the just

Smell sweet and blossom in their dust.”

If we think intellectually, we come to see that the subsequent series of events that developed as its backdrop is very significant for the creation of Bangladesh. Here I am concerned with the far-reaching impacts of the language movement that reached its climax on 21st February, 1952.

The perception of 21st February has greatly influenced our national sentiment in the sense that we became aware that we are a separate nation with our own language, culture, civilization and identity which are quite distinct from those of the Pakistanis who exploited us in the name of religion without having any territorial integrity and good will. Henceforth, there was much upsurge and frequent movements against the military regime of President Ayub Khan.

At that time, the stage was set and the moment was psychological for the advent of a great leader. Then Sheikh Mujibur Rahman now called the Father of the Nation appeared in the political scene as a deliverer of the nation. Contextually his six-point involvement got momentum as everybody in the country was impatient with the policy of discrimination adopted by the central government of Pakistan. In the eastern wing, the people lost their faith in the government which gradually became very unpopular. In line with this, when AL won a landslide victory in the parliamentary election in 1970 as the largest party, it was not allowed to form government with Sheikh Mujibur Rahman as the Prime Minister due to the conspiracy of general Yahya Khan and Zulfiqar Ali Bhutto.

Our countrymen took it as a great blow to our prestige as they denied showing respect to the general mandate of the people. For this reason, there was much outburst of discontent, unrest and tumult everywhere in our region. Instead of recognising the victory and wishes of the general masses, they resorted to oppressive measures to quell the rebellion. Accordingly, the army was burning homes, destroying paddy-fields, plundering property, shooting innocent people and raping women. There was panic and influx of refugees from this country to India.

In view of these circumstances, Bangabandhu delivered his historic 7th March speech which culminated in the declaration the independence of Bangladesh. Then started another chapter of our history; the War of Liberation began and continued for nine months without any break until the enemies and their accomplices surrendered to our brave Freedom Fighters and the Allied Forces of the mighty Indian Army on 16, December 1971.

Now, it should be borne in an mind that behind our bold stand against all challenges threatening our nation like oppression, exploitation and occupation by the enemies, the consciousness of 21st February helped us realize our pride and glory and awoke as a rising nation under the dynamic leadership of Sheikh Mujibur Rahman who gave us the clarion call to shake off the yoke of foreign domination and subjugation. The perception of 21st February imbued us with the spirit of nationalism, great love for language, and culture and freedom. By the perception of this epoch-making day, we have made it known to the world that we are a free nation and know how to struggle for the liberation of our country and maintain the sanctity of our mother tongue. Moreover, celebrating 21st February we enhance the dignity of our mother language worldwide and as such the UNESCO has already declared 21st February as an International Mother Language Day. This universal recognition has brought great glory for us in the estimation of the world community. So for all the events stated above, we can safely conclude that the emergence of Bangladesh is largely due to the perception of 21st February, an unforgettable day with its immortal song: “Amar bhaier roktey rangano Ekushey February/ Ami ki bhulitey pari” that we have enshrined in our memory with profound love and respect for the martyrs of our language movement.