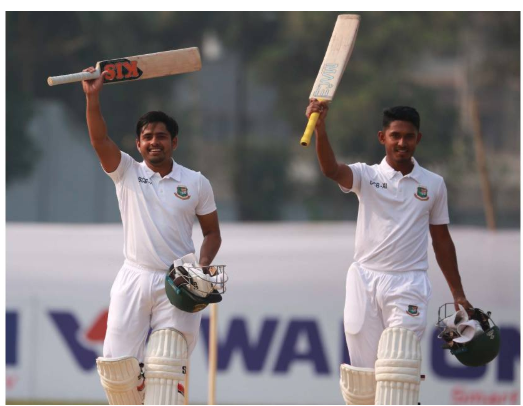 Zimbabwe declared their first innings for 291 for 7 in 90 overs on the first day (Tuesday) at Bangladesh Krira Shikkha Protishthan ground in Savar..

In reply, BCB XI scored 288 for 5 in 59.3 overs when the bails were drawn for the second and final day (Wednesday) to settle for a draw.

After the early dismissal of five top order batsmen for just 69 runs, Al Amin and Tanzid confidently stood in the middle to contribute 219 runs in the 6th wicket stand to rescue the team from an awkward situation.

Al Amin remained unbeaten on 100 off 145 balls with 16 fours while Tanzid contributed 125 runs off 99 balls, featuring 14 fours and five sixes.

Zimbabwe won the toss and opted to bat first. They posted 105 runs in the first wicket stand on the dry wicket of BKSP which is regarded as the most batting-friendly wicket of the country.

Prince Masvaure was the first man to fall for 45 off 77 balls with seven fours while his opening partner Kevin Kasuza posted 70 for 130 balls with 12 fours. The first wicket was taken by Al Amin, the captain of BCB XI.

Shahadat, who was one of the main weapons of Bangladesh U-19 team during the World Cup, is known for his fine batting ability. But in this game, he took three wickets conceding 16 runs in eight overs. The off-spinner was the most successful bowler of BCB XI on day one.

After the tour game, Zimbabwe will lock horn with Bangladesh in the one-off Test of the series starting from February 22 at the Sher-e-Bangla National Cricket Stadium.

Both teams will play three ODIs and two T20Is as well. The ODIs will take place in Sylhet on March 1, 3 and 6 while the two-match T20Is series will be played in Dhaka on March 9 and 11.