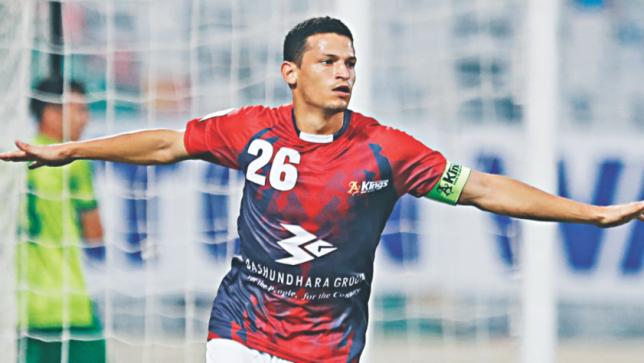 With the day’s feat, the holders Kings maintained their unbeaten for 13-league games at home with 12 wins and a draw. Kings will play against Bangladesh Police FC on February 20 at 3:30 pm at Bangabandhu National Stadium (BNS) here.

Colindres, Sufil and national colored Defender Topu Barman got at least seven chances, but failed to find the net under strong pressure from the Uttar Baridhara defenders.

Colindres missed five close chances in the 7th, 28th, 42nd, 82nd and 84th minutes while Topu failed to send ball home failing to utilise a close-range free-kick from Colindres in the 74th minute and Uttar Baridhara Goalkeeper Azad denied at least two long-range shots from Sufil in the 83rd minute.

On the other hand, Kings goalie Anisur Rahman Zico kept his post safe. Zico smartly saved two close-range free-kicks from Uttar Baridhara’s Gambian Forward Darboe Landing in the 41st minute and in the stoppage time (90+1 minute) and smartly fisted a long-range shot from Captain Sumon Reza in the 86th minute.

Kings were handed a blow just a minute before the full-time while their reliable Defender Yeasin Khan got the marching order as he conceded his second yellow card after conceding the first one in the first half.  The 25-year-old defender will miss the next match.

Kings clinched their maiden BPL crown in their first appearance in the league securing 63 points with 20 wins, 3 draws and one defeat from all 24 matches. They also clinched the title of the season’s curtain raiser 31st Federation Cup Football beating Rahmatganj Muslim Friends Society by 2-1 goals in the final in January.

On the other hand, Bangladesh Police and Uttar Baridhara got promoted to the BPL 2019-20 after emerging BCL champions and runners-up respectively. BCL runners-up returned home from Federation Cup empty-handed as they conceded defeat in all three matches of four-team Group D.