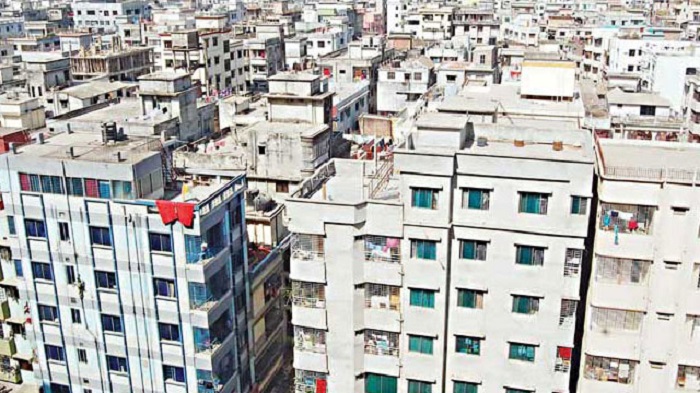 No action has been taken by the authorities concerned against the owners of buildings constructed violating building code as laid down by the Rajdhani Unnayan Kartipakkha (RAJUK), it is unknown if at all there was any action plan to deal with the lawbreakers.

At least 66 percent of buildings were found to have been constructed in violation of building code as per RAJUK’s approved design.

Sources said despite assurance of action a year ago, it was unclear whether a plan of action has been taken or not.

RAJUK carried out a survey between January and July 2018 to find the number of high-rise buildings constructed by violating laws. It conducted the survey 2.04 lakh buildings under its 1,528 square kilometre jurisdiction.

The survey found that around 1.31 lakh structures out of 1.95 lakh completed buildings were constructed flouting RAJUK building code.

Notices were issued to the owners of 1,818 multi-storied buildings around Dhaka city that have been built violating the building code or without any approved design. Some of the owners were asked to rectify their fault. “In the notice, a certain time limit was given, but I don’t know what happened later,” said Tanzila Khanom, director (Development Control-1) of RAJUK.

Regarding action against 66 percent law violators ministry of housing and public works was also supposed to be given direction to RAJUK regarding the action to be taken rest of the law violators, but still the direction has not been given, she added. She added, “We are taking against law violators individually.”  On February 3, 2019, Housing and Public Works Minister SM Rejaul Karim told the parliament that 66 percent of buildings in the capital were constructed violating building code of Rajdhani Unnayan Kartripakkha (Rajuk).

In reply to lawmakers' queries, the minister said Rajuk conducted a survey on 2.04 lakh buildings under its 1,528 square kilometre jurisdiction, between January and July 2018. Besides, out of 8,730 under-construction buildings, 3,342 were found flouting approved designs of Rajuk.

Actions were also not taken against 1818 multistoried building owners who were at fault after the tragic Banani FR Tower Fire.

Housing and Public Works Minister SM Reazaul Karim, on 30 October 2019, said: “We are sending notices to the owners of these 1,818 buildings. The process has already started. Our action will follow their responses. “I can assure you that, because I myself have started the process.”

RAJUK member (Development control), Abul Kalam Azad said, “On the basis of partial information we cannot go for action. Because we have surveyed on high-rise buildings and those below 10 storied is not under the survey. There is a problem regarding our action as we need a detailed engineering study. We sometimes have to demolish the entire structure or sometimes partially.”

Besides, he added that “We need to amend our town improvement act 1953 because it has a provision for a small fine for law violators.  Without updating rules, we cannot go for action. We cannot go for action with a weak authority because the people who violate law are stronger than us.”

Kalam said “We have formed a committee with BUET experts regarding how we can go for action five months ago. We have to measure the environmental, structural compliance or we can ask for retrofitting,” he added.

Been asked when would the action start, he said, “I don’t know when we will go against the law violators. You know making a new law or taking a thing to the parliament is a time consuming matter.”