Mother and daughters 'too big' for business class 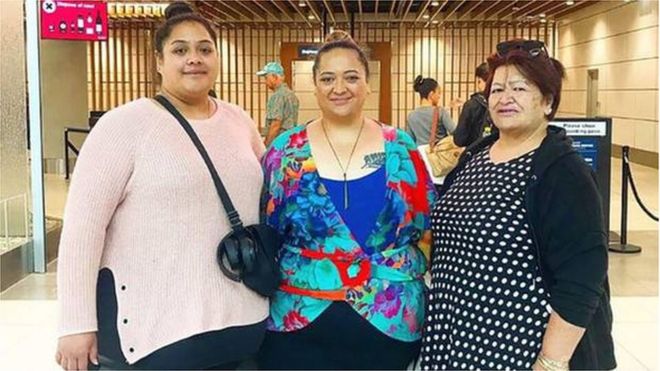 Enjoying the luxury of business class seats on an 11-hour flight back to Auckland was meant to be a treat for Renell and Tere after undergoing weight-loss surgery in the city of Bangkok.

Instead, the sisters and their mother, Huhana, were left ''traumatised'' by Thai Airways staff who came at them with tape measures telling them they were ''too big'' for their business class seats.

Six months on from that ''disgusting'' experience and Huhana, 59, is still bitter about the experience.

''The staff were shouting 'too big, too big' at us repeatedly. Rows of people watched as they measured us at the check-in. It was so humiliating the way we were treated that I just broke down in tears,'' said Huhana.

The language barrier didn't help as staff refused to let them enter the business class section and made them sit in economy class.

Huhana, a social worker, says she won't fly again until she loses weight, to avoid the sort of traumatic experience Thai Airways put her and her daughters through.

"We were really looking forward to flying on business class and instead we were left traumatised,'' she added.

Most airlines can provide seatbelt extensions for larger passengers.

But Thai Airways said its business class seatbelts are fitted with built-in air bags which means they can't be extended. The family are still confused by this explanation.

Since their traumatic experience last summer, Huhana and her daughters have been trying to get a refund from Thai Airways. But the airline has only offered to recompense the family based on the difference between business and economy fares.

She approached the travel agent she booked the flights with, Flight Centre, who said it would provide a full refund, although the family had to wait more than six months for it.

When contacted by the BBC, a spokesman for Thai Airways said it now has better warnings in place on its reservations system so agents are made aware of such issues.

The family were on a tour organised by Destination Beauty, which specialises in sending clients to Thailand for weight-loss and plastic surgery.

Martin Olsen, chief executive of Destination Beauty, said he was ''very saddened and surprised'' at the way the airline handled the situation.

He was also confused by the actions of Thai Airways staff as ''many obese people book business class as they are unable to fit comfortably into economy class''.

When it comes to oversized passengers, it's up to the discretion of each airline how to manage the situation, a spokesman for the Civil Aviation Authority (CAA) said.

Airlines do calculate the take-off weight for a plane, but this takes into account the estimated weight of passengers, their luggage and fuel. ''In most cases the average passenger is well under the weight limit as the allowance tends to be fairly generous,'' he said.

Most airlines recommend that if you think you will be too big for your seat, you should buy a second seat at the time you make your booking. But few airlines have specific guidelines when it comes the definition of ''oversized''.

However, American Airlines does states '''if a customer's body extends more than one inch beyond the outermost edge of the armrest and a seatbelt extension is needed, another seat is required''.