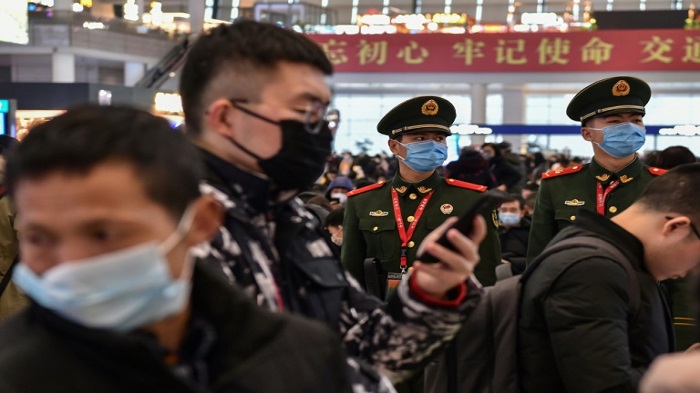 China locked down nearly 20 million in two cities at the centre of a deadly virus outbreak on Thursday, banning planes and trains from leaving in an unprecedented move aimed at containing the disease which has already spread to other countries.

The respiratory virus has claimed 17 lives since emerging from a seafood and animal market in Wuhan, infected hundreds of other people nationwide and been detected as far away as the United States.

Streets and shopping centres in Wuhan, a major port city in central Hubei province with a population of 11 million people, were eerily quiet after authorities told residents not to leave town "without a special reason".

Trains and planes out of Wuhan were indefinitely suspended, tollways on roads out the city were closed, leading to fear and panic for those who were trapped.

Hours later, authorities in neighbouring Huanggang announced that public transport and train services would be suspended at midnight, while people were told to not leave the city of 7.5 million.

All of Huanggang's cinemas, internet cafes, and the central market will close.

A third city, 1.1 million-population Ezhou, announced the train station had been temporarily closed earlier in the day.

"We are feeling as though it is the end of the world," said one Wuhan resident on China's Twitter-like Weibo platform, voicing concerns about shortages of food and disinfectant.

Another described being on the "verge of tears" when the de facto quarantine was announced, with the misery compounded by it coming on the eve of the Lunar New Year holiday.

In Beijing, the government cancelled massive gatherings that usually attract throngs at temples during the New Year holiday.

Wuhan's train station and airport, which should have been packed with people coming travelling for holiday family reunions, were almost empty except for workers on Thursday afternoon.

The few people wandering in the streets of the city were wearing masks as mandated by police.

At a shopping centre that would have been packed in normal times, a man who works there said he understood the government's measures.

"Even if we can't celebrate the New Year this year, there's always next year," said the man surnamed Sun.

Taxis in Wuhan tripled their fares, a driver admitted.

"It's very dangerous to be outside at this moment but we need to earn money," the driver told AFP.

More than 570 people have been infected with the virus across China -- with most cases found in Wuhan, where a seafood market that illegally sold wild animals has been identified as the epicentre of the outbreak.

The coronavirus has caused alarm because of its similarity to SARS (Severe Acute Respiratory Syndrome), which killed nearly 650 people across mainland China and Hong Kong in 2002-2003.

Like SARS, it can be passed among people through the respiratory tract.

The first case of the new virus was confirmed on December 31, and it has since been detected in Japan, Hong Kong, Macau, South Korea, Taiwan, Thailand and the United States.

The 17 people who died in China were aged from 48 to 89, and had pre-existing health conditions, Chinese health authorities said Thursday.

The World Health Organization on Wednesday delayed a decision on whether to declare a global health emergency -- a rare instrument used only for the worst outbreaks.

The emergency committee will meet again on Thursday, after experts were split over declaring a public health emergency.

WHO chief Tedros Adhanom Ghebreyesus said "more information" was needed but he also praised China's "very, very strong measures" that will help control the epidemic and "minimise the chances of this outbreak spreading internationally".

With hundreds of millions of people travelling across China this week for the Lunar New Year holiday, the National Health Commission announced on Wednesday measures to curb the disease nationwide -- including sterilisation and ventilation at airports and bus stations, as well as inside planes and trains.

Wuhan's special anti-virus command centre said the quarantine measures were meant to "effectively cut off the virus spread, resolutely curb the outbreak and guarantee the people's health and safety," according to state media.

While departures were banned, trains and planes were still allowed into the city.

The city's tourism and culture department cancelled all group tours until February 8, according to state media.

Animals are suspected to be the primary source of the outbreak, with Chinese health officials saying the virus originated from the market where wild animals were illegally sold.

Studies published this week suggest that the virus may have originated in bats or snakes.

The WHO has confirmed that the virus can be passed between people, at least those in close contact. Chinese health officials warned it could mutate and spread further.

"There are many unknowns to address in this event including clinical severity and the true extent and nature of disease transmission," said Michael Ryan, head of the WHO's health emergencies programme.

Chinese authorities on Thursday reported dozens of new infections, bringing the confirmed total to 571. About 5,000 people remain under medical observation.

But scientists at the Imperial College in London estimate that 4,000 people have been infected in Wuhan.

Countries have intensified efforts to stop the spread of the pathogen -- known by its technical name 2019 Novel Coronavirus (2019-nCoV).

Passengers are facing screening measures at airports around the world.

Tedros, the WHO chief, on Wednesday indicated the situation was not escalating out of control, saying there was "stability" for the moment.

He also praised China's openness about the outbreak as "commendable".

But a senior US State Department official said Washington was "still concerned" about transparency in the Chinese government.

During the SARS epidemic, the Chinese government took months to report the disease and initially denied WHO experts access to southern Guangdong province, where it originated.