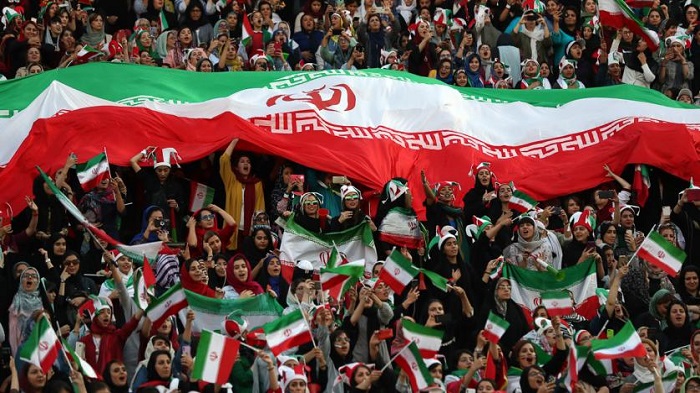 Iranian women cheer during the football match between their national team and Cambodia in the 2022 World Cup qualifier at the Azadi Stadium in Tehran. Photo: AP

Iran’s soccer federation said Friday it has been banned from hosting international matches inside the country.

The “federation received a letter today (Friday) from the Asian Football Confederation… announcing the decision to hold AFC Champions League matches hosted by Iranian teams in neutral countries,” said a statement on the federation’s website.

An extraordinary meeting was immediately held to address the situation and the managers of the four clubs representing Iran in the tournament will be consulted on Saturday, it added, saying “The final position of Iranian clubs and the federation will be announced in the following days.”

Those teams are Persepolis, Esteghlal, Sepahan and Shahr Khodro.

The federation did not state the reason for the ban.

The federation’s spokesman said Iran is prepared to host foreign teams and has guaranteed match security to the AFC, calling on the organization to stand against any accusations stating otherwise.

“Iran has the full readiness to host teams and has proven this repeatedly in recent years,” said Amir Mehdi Alavi on the federation’s website.

He pointed to 2018’s ACL final held in Tehran and said “the sports minister has given the AFC the needed security assurances regarding hosting” teams.