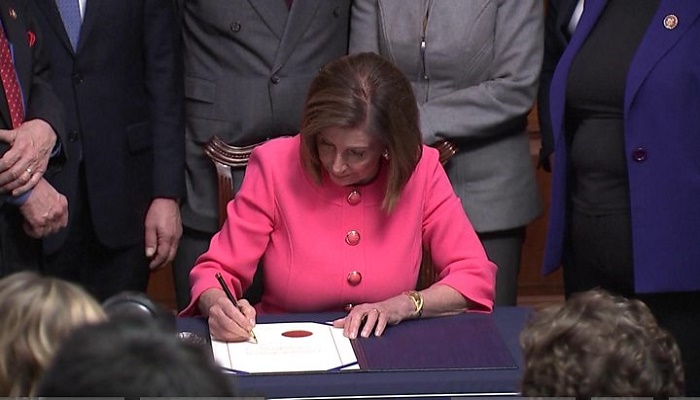 The US House of Representatives has passed a resolution to submit articles of impeachment against US President Donald Trump to the Senate for a trial.

The resolution passed largely along party lines by 228 votes to 193.

House Speaker Nancy Pelosi signed copies of the articles alongside the team of Democratic lawmakers who will prosecute the case against Mr Trump.

The Senate, controlled by Mr Trump's Republican Party, will decide whether to convict and remove him from office.

The articles were then transferred to the Senate, where Republican Senate leader Mitch McConnell said they would be exhibited on Thursday at noon, followed by a reading on the floor of the upper chamber. He said the trial would begin on Tuesday.

The president is accused of abuse of power and obstruction of Congress. He denies trying to pressure Ukraine's leader during a phone call on 25 July last year to open an investigation into his would-be Democratic White House challenger Joe Biden.

The Senate trial will be only the third of a US president in history.