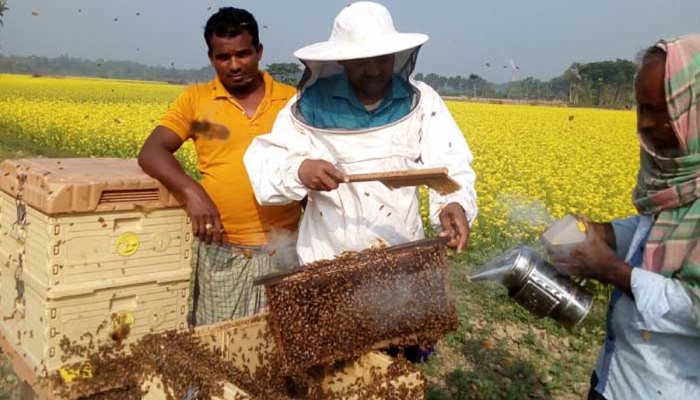 The commercial farming of mustard and beekeeping in the same field together are expanding in different upazilas of the district as it has been found to be very profitable.

The apiculture in mustard fields boosts the yield while reduces the production cost, said agriculture officials.

According to the local office of the Department of Agricultural Extension (DEA), farmers have cultivated mustard on 12,060 hectares of land in eight upazilas of the district this season against 9,775 hectares last year.

Of them, farmers have set up bee colonies or beehives in 1,268 hectares of land with a target to extract 4,000 kgs of honey this season.

Last year, 3,612 kgs honey were produced in the district from mustard fields.

Talking to UNB, Asmat Ali, a beekeeper from Hamidpur in Sadar upazila, said he has cultivated Bari-14 variety of mustard on 1.5 bighas of land in the current season and set up 45 hives in the field. “I’ve so far extracted 25 kgs of honey. I’ll be able to collect mustard honey for one more month. I hope 10-15 more kgs can be extracted during the period.”

Thousands of bees collect pollen and nectar from mustard flowers which help its proper pollination, boosting the mustard yield, he said.

He said the production increases by around 15-20 percent if mustard and honey are cultivated simultaneously.

The agriculture officer said they are encouraging farmers in honey cultivation in mustard fields which is very profitable.

Md Mohammad Ali, additional director of DAE Jashore region, said there is a better pollination of mustard flowers when beekeeping and mustard cultivation run simultaneously. “This boosts the yield by about 20 percent.”

He said the beekeeping in mustard fields increased due to the use of modern technology. “Steps have been taken to encourage farmers to apiculture providing them with necessary equipment, including hives,” he said.