Australia fires: Rain falls but warnings of huge blazes ahead 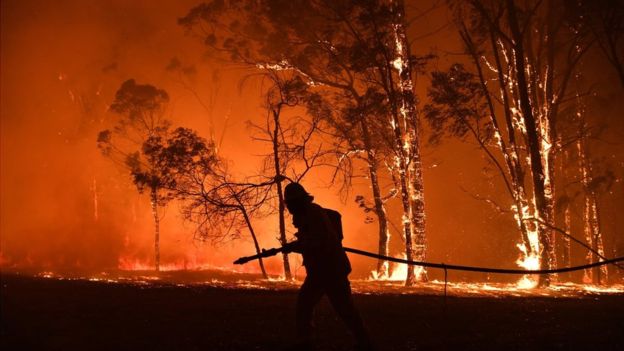 Rain is falling in Australia and temperatures have dropped - but officials warn that fires ravaging the country will "take off" again.

Sooty rain fell down the east coast, from Sydney to Melbourne, with "torrential" rain reported in some parts of New South Wales.

But on Sunday night officials warned temperatures would rise by Thursday.

They also said huge fires in Victoria and New South Wales could meet to create a larger "mega blaze".

Authorities have continued their efforts to provide supplies for thousands of people driven from their homes by the fires.

"This morning it is all about recovery, making sure people who have been displaced have somewhere safe," Ms Berejiklian said.

The weekend saw some of the worst days of the crisis so far, with hundreds more properties destroyed. Rural towns and major cities saw red skies, falling ash and smoke that clogged the air.

In NSW, all fires were back at the "advice" level, the lowest alert level, NSW Rural Fire Service Commissioner Shane Fitzsimmons said.

However, Victoria Emergency Management Commissioner Andrew Crisp warned "it will warm up" and the fires "will take off again".

On Monday morning, there were only around 10km between a blaze in Victoria's Corryong and two burning at Kosciuszko National Park in New South Wales.

"This will be a changing, dynamic situation," he said, warning it was "inevitable" the fires would join across the border.