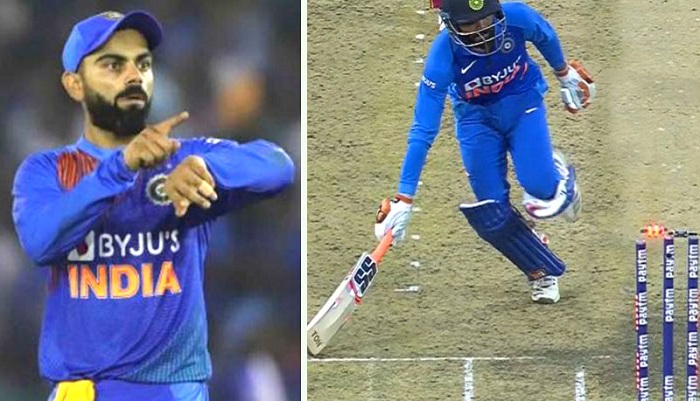 Indian skipper Virat Kohli got irritated and rushed to the boundary line from the dugout after a controversial runout that ended Ravindra Jadeja’s stay in the middle in the first ODI against West Indies at MA Chidambaram Stadium in Chennai on Sunday.

The incident took place in the 48th over when Jadeja tried to steal a single and put Shivam Dube on strike following the dismissal of Kedar Jadhav. Roston Chase picked up the ball and took a shy at the stumps. It was a direct hit, but it appeared that Jadeja has made his ground safely, and the West Indies did not appeal for a runout.

The umpire Shaun George, who was having a close look at the throw, did not go for a TV referral either. Chase made a feeble appeal but was convinced that Jadeja had made his crease. But the video replays showed that Jadeja was outside the crease when the bails came off.

Immediately after seeing the replays, West Indies skipper Kieron Pollard asked the umpire to call for the third umpire. The umpire checked with match referee David Boon if he can still go for a third umpire call, and got an approval for the same. The third umpire saw the replay once more and ignited the red light.

A miffed Virat Kohli was seen nearby the boundary ropes as the entire scene played out. Later, India coach Ravi Shastri was also seen in the dugout unhappy with the decision.

Harsha Bhogle, who was commentating at the time questioned if an umpire can wait that long for signalling to the third umpire, since it was taken after the players had already seen the replay. “I would be very unhappy if I was from the batting team,” he said.

Shreyas Iyer and Rishabh Pant slammed fluent half centuries as India’s middle order came to party to help the side post 287/8 in 50 overs against the West Indies in the first One-Day International at the MA Chidambaram Stadium on Sunday.