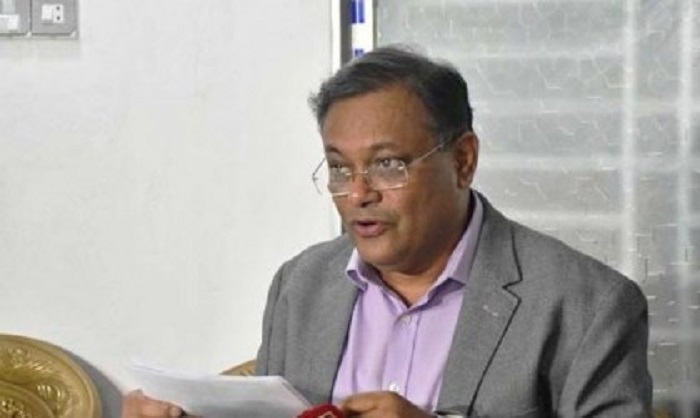 Information Minister Dr Hasan Mahmud on Sunday urged the foreign journalists to project Bangladesh’s image and development before the world.

He made the call while exchanging views with about 36 international journalists of different countries at the conference room of the Information Ministry. Information Secretary Abdul Malek was present.

Dr Hasan said Bangladesh is advancing fast under the dynamic leadership of Prime Minister Sheikh Hasina and that is why the foreign journalists are urged to uphold the country’s image and progress before the world.

“Under the dynamic leadership of Prime Minister Sheikh Hasina, Bangladesh is moving fast towards the fulfillment of the dreams of Bangabandhu and freedom fighters as well. Bangladesh has already graduated to a middle-income country from the least developing one,” he said.

Hasan, also Awami League publicity and publication secretary, said the country has gained remarkable progress in many socioeconomic indexes, including human development index, and achieved GDP growth higher than other countries in the last 10 years.

Talking to reporters after the meeting, the information minister said the foreign journalists were requested to highlight the potential of Bangladesh as it has a target, under the leadership of Prime Minister Sheikh Hasina, to become a developed country by 2041.

The journalists were informed that the world’s longest sea beach and the largest mangrove forest, which is the habitat to Bengal tigers, are located in Bangladesh, he said.

About the illegal direct-to-home (DTH) connections, Hasan said the government will conduct drives against dishonest distributors, who installed the DTH illegally, from January 1.

“Firstly, illegal DTH connections will be cut off. At the same time, mobile courts will be conducted against the users and the distributors who installed the DTH illegally from January 1,” he added.

Replying to a question, the Awami League publicity and publication secretary said the Foreign Ministry, on behalf of the government, invites foreign journalists every year, while 36 journalists from 20 countries visited Bangladesh this year.