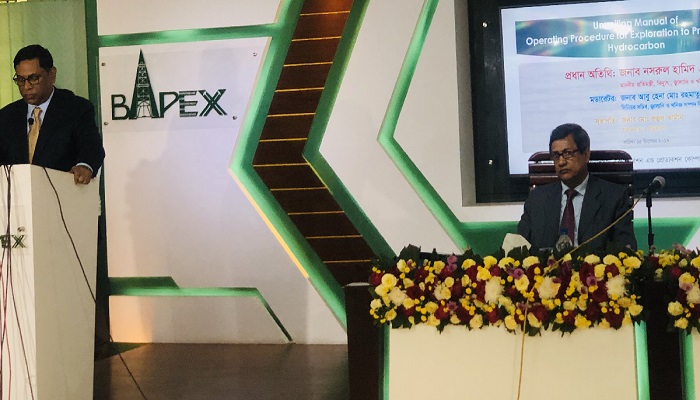 State Minister for Power, Energy and Mineral Resources Nasrul Hamid on Sunday came down heavily on the top executives of Petrobangla and Bapex for their ‘failure’ to work out any effective plan in the last several years.

They warned them of retrenching manpower as happened in Desco and DPDC for their poor performances.

“We’ll reassess your human resources if we don’t have our works done by you,” he told the officials of the two organisations while addressing a seminar titled “Hydrocarbon Exploration in Bangladesh: Progress & Challenges” organised by Bapex (Bangladesh Petroleum Exploration and Production Company) at its auditorium in the city.

Petrobangla is the state-owned principal organisation in the country’s hydrocarbon exploration, production and marketing in both upstream and downstream while Bapex has been its subordinate body engaged in exploration and production activities.

Nasrul Hamid said this is unfortunate that Petrobangla and Bapex were asked to give plans for their future works but both failed to do so.

“Even Petrobangla was asked to organise a seminar to discuss the future activities of hydrocarbon exploration. But it failed to organise it,” the state minister said.

Voicing his resentment, Nasrul said the government is very serious about domestic gas exploration as it has to import huge gas from abroad.

Petrobangla and Bapex have to think in a wider perspective and engage themselves in that way. But the biggest challenge is their human resources who’re not ready to think out of the box,” he said.

Nasrul Hamid said this is really shocking that Petrobangla and Bapex officials speak out and give new ideas only after their retirement.

At the seminar, Bapex general manager HawladerTawhidul Islam made a presentation on dry, abandoned and suspended wells of Bangladesh while general manager Alamgir Hossain presented a paper on geological field survey for hydrocarbon exploration: progress and challenges.

Syed Badrul Imam said India has been conducting massive drillings in bordering areas with Bangladesh and found huge gas and wells, while Bangladesh conducted a very few drillings inside its territory and there is no success.