Denial of 1971 genocide should be punished: Shahriar Kabir 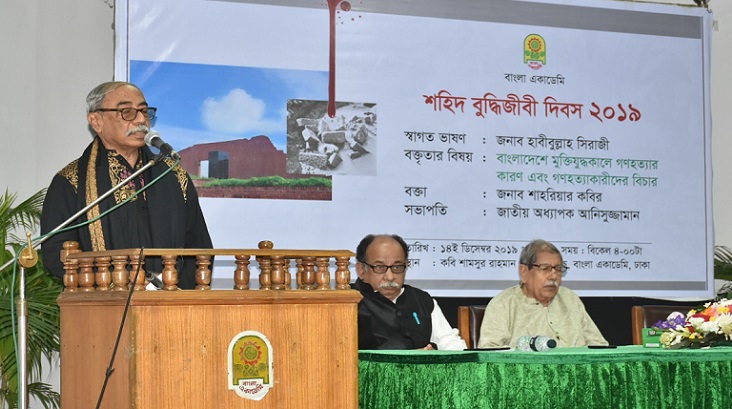 President of Ekattorer Ghatak Dalal Nirmul Committee Shahriar Kabir has said any denial of the arbitrary killing of mass people, including country’s brightest minds, during the genocide of 1971 should be protested and brought under the law.

“Our freedom fighters, including the country’s brightest minds and brave hearts, always stood for the independence of Bangladesh. So, the Pakistani occupation forces murdered them showing highest-ever cruelty. We need to take firm stand against any denial of that brutal genocide,” he said while speaking at a seminar titled ‘Reasons behind genocide in Bangladesh’s Liberation War and punishment for the exterminators’ at the Bangla Academy on Saturday.

The seminar was arranged at Poet Shamsur Rahman Seminar Hall of the academy, marking the Martyred Intellectuals Day.

“The genocide of 71 can’t be compared to any other genocide in the world. Even the infamous World War-II was less scary than our Liberation War and genocide of 1971. The Pakistani occupation forces carried out the massacre for only nine months,” Shahriar said.

He also underscored the need for realising international recognition of this genocide through collaborative efforts.

“The massacre of the intellectuals was at its peak in December and even continued after independence, but it started way back in March of 1971. All those martyred intellectuals are gems of the nation and they’ll always be remembered in our independent Bangladesh,” Prof Anisuzzaman said.

Habibullah Siraji expressed his gratitude to the martyred intellectuals on behalf of the academy, acknowledging that they had always been intellectually and soulfully connected to the institution.

A one-minute silence was observed prior to the event to homage to the martyred intellectuals.

Apart from the seminar, the academy paid tributes to the martyred intellectuals placing floral wreaths at their graves and Martyred Intellectuals Memorial.