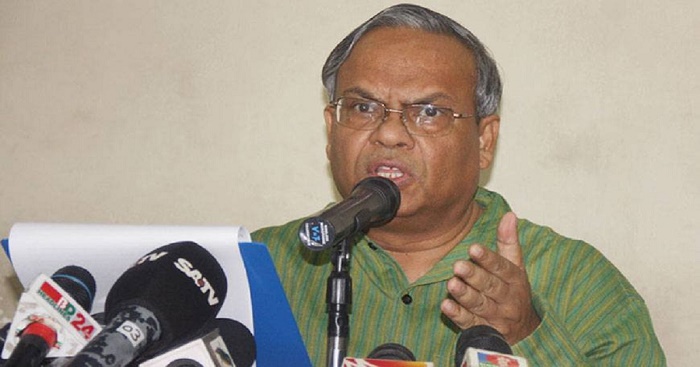 BNP on Saturday alleged that their party chairperson Khaleda Zia’s relatives have not been allowed to meet her at BSMMU for 31 days at the “behest of the government”.

“Even after the passing of 31 days, Khaleda Zia's relatives haven’t been allowed to meet her. Our chairperson’s family members got the permission to meet her today (Saturday), but suddenly it was cancelled around 2pm,” said BNP senior joint secretary general Ruhul Kabir Rizvi.

Speaking at a press conference at BNP’s Nayapaltan central office, he also said the relatives of Khaleda were told that their permission has been cancelled at the directives of the higher authorities. “This higher authority is Prime Minister Sheikh Hasina who has become desperate out of her hunger for power,” Rizvi said.

He strongly condemned and protested the cancellation of permission of the BNP chief’s relatives to meet her.

The BNP leader said though the relatives can meet a prisoner after every seven days as per rules, the government is depriving the relatives of former Prime Minister Khaleda Zia of their right to meet her even after 31 days.

“We fear Khaleda Zia is seriously ill. That’s what her family members were not allowed to meet her as the government wants to hide her illness,” he observed.

On Thursday last, the Appellate Division rejected the bail petition of the BNP chief in Zia Charitable Trust graft case.

Khaleda Zia has been in jail since February 8, 2018 after she was sentenced to five years' imprisonment in Zia Orphanage Trust graft case.

She has been receiving treatment at Bangabandhu Sheikh Mujib Medical University (BSMMU) since April 1 last.

Her party has been accusing the government of not providing adequate treatment facilities to Khaleda.