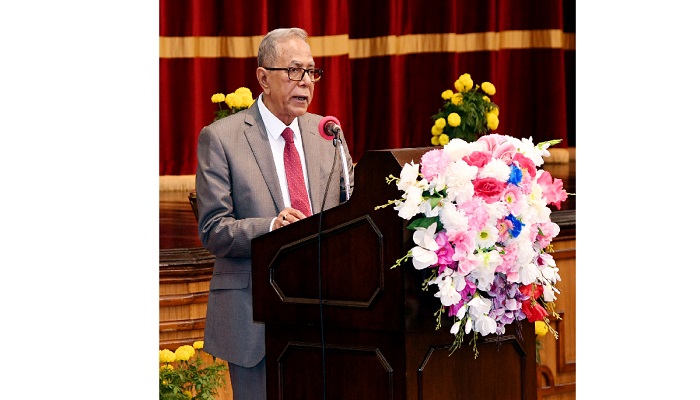 President Abdul Hamid on Sunday urged participants of the National Defence Course (NDC) and Armed Forces War Course (AFWC)  to use their knowledge for development of the country.

” I’m sure you’ll be able to make a huge difference and set examples for others through your prudence and leadership, and provide fresh impetus to the quest for development,” he said.

He came up with the remarks when successful participants of the National Defence Course-2019 and Armed Forces War Course-2019 paid a courtesy call on him at Bangabhaban in the afternoon.

He urged all to observe the birth centenary celebration of Father of the Nation Bangabandhu Sheikh Mujibur Rahman and the Golden Jubilee celebration of independence in an elegant manner.

"It’s a matter of pleasure that the birth centenary of Father of the Nation Bangabandhu Sheikh Mujibur Rahman and the Golden Jubilee of our independence will be celebrated throughout the country and outside Bangladesh in a befitting manner in 2020 and 2021 respectively. I call upon all to observe these two magnificent events in an elegant way," he said.

Describing the month of December as the month of remembrance of united struggle, sacrifice and joyous victory, he recalled with profound respect, the architect of the country’s independence Father of the Nation Bangabandhu Sheikh Mujibur Rahman and paid his deep homage to the martyrs and valiant sons of the soil, who made the supreme sacrifice in the Liberation War.

Congratulating the graduates on their successful completion of the year-long National Defence Course and Armed Forces War Course at NDC, President Hamid said he believes that this is an outstanding course ranging from national security to national development, leadership to policymaking that will enrich their professional knowledge and give them a greater confidence in discharging their duties.

"The members of War Course have also gained knowledge on leadership and the mechanism of warfare at operational level in relation to the present global context. It’ll sharpen their knowledge and make them more professional in the coming days," he added.

More than 150 course participants, including 31 from 16 countries, took part in the courses.

Secretaries concerned to the President were also present.