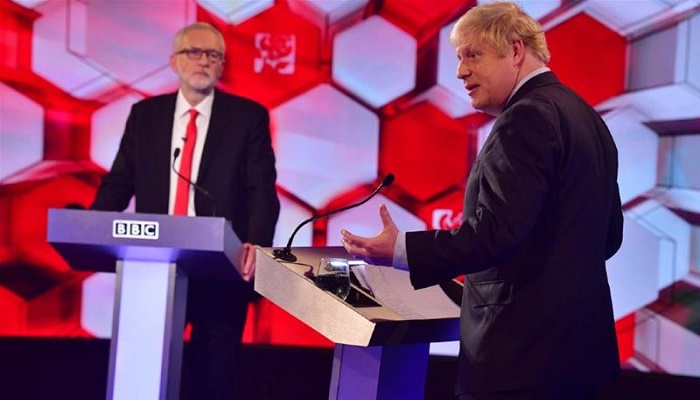 During the live debate, Mr Corbyn said Labour would bring Brexit "to an end" by negotiating a new deal and putting it back to the public in a referendum, alongside a Remain option.

Mr Johnson said he had "a wonderful deal", and would use it to take the UK out of the EU on 31 January.

Other topics covered included the NHS, security and Northern Ireland.

Early on in the debate - hosted by Today presenter Nick Robinson - the Labour leader said he would negotiate a new withdrawal agreement with the EU within three months before putting it to a final say referendum - alongside Remain - within six months.

The prime minister countered by saying he already had a withdrawal agreement in place, and would use it to leave the EU next month if he won a working majority in Parliament.

But Nick Robinson challenged Mr Johnson, pointing out that while he had a withdrawal deal in place, he did not have a trade deal with the EU, and so could not rule out a no-deal exit in January 2021.