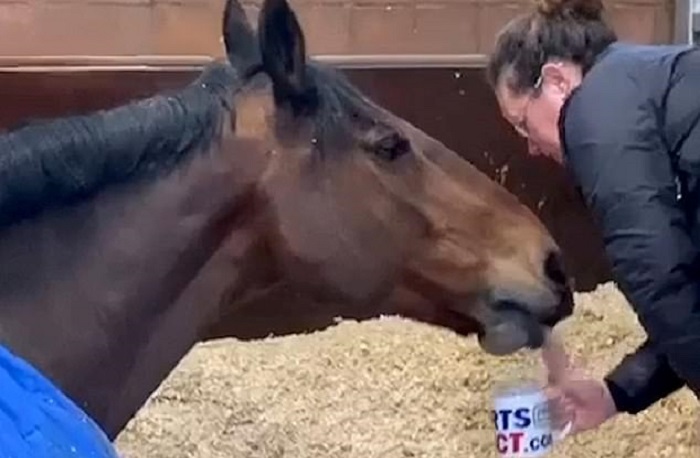 Many of us struggle to get started with work every morning without a cup of tea or coffee to wake us up fully. This police horse in UK is no different.

Jake the horse has been with Merseyside Police for the past 15 years. In the course of his long career, Jake has also picked up a liking for tea - so much so that he refuses to start his shift without his morning cuppa, reports London-based Daily Mail.

Jake developed a liking for tea after mischievously stealing a slurp from his rider's cup. The 20-year-old horse began sticking his tongue in his rider's cup every day, so members of the Merseyside Police Mounted Section now include him in their morning round of tea.

Daily Mail reports that officers say Jake will stay in his stable in Allerton, Liverpool, waiting for his special big mug to be brought to him every morning before deigning to begin work.

"Jake refuses to get out of bed until he is brought a warm cup of @tetleyuk tea," wrote Merseyside Police on Twitter, sharing a video of Jake with his morning brew. "Once he has drank this he is ready for the day."

A spokesperson for Merseyside Police also revealed that Jake likes his tea with skim milk and two sugars.

Jake's video has delighted many on social media. Since being posted on Twitter about a week ago, it has collected over 2 lakh views and a ton of amused comments.

Merseyside Police Mounted Section manager and trainer Lindsey Gaven said to Daily Mail: "Jake is one of twelve horses we've got at the stable working with us.

"I'd definitely describe Jake as a horse with a lot of character. We've all learnt his tea order - he'll deal with one sugar, but is definitely happier when you remember to give him two."