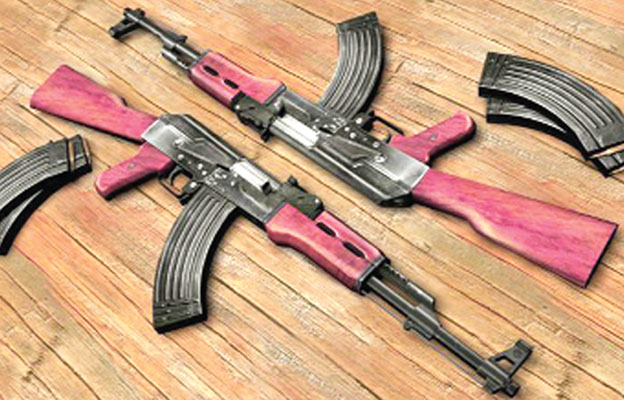 An apparent arms race over supremacy among the ethnic groups in the Chittagong Hill Tracts (CHT) has emerged as a major cause for security concerns and peace in the scenic area, intelligence sources in Bandarban said.

The ethnic groups represented by their political fronts including Parbatya Chattagram Jana Samhati Samiti (PCJSS) and United People's Democratic Front (UPDF) in the three southeastern hill districts of Bandarban, Rangamai and Khagrachari numbered about 10,000 and were smuggling in the sophisticated weapons. intelligence sources said.

“Activists of these groups are using such various sophisticated arms against each other to establish their supremacy in the hill tracts triggering panic among the residents who want peace,” one source told the daily sun.

He said the feuding groups keep pointing fingers at one another for the unrest.

A total of 56 people including 14 Bengali settlers have been killed in different parts of the hill tracts, bordering India and Myanmar, in the last several months until October this year.

With the killing of 56 people this year, the number of the tribal people killed was 207 in the last five years till October, while 114 Bengali people lost their lives during the same time.

Incidents of tribals abducted in the last five years were 347 and Bengali 169. Incidents of shootouts were 192, while 561 weapons of various kinds seized during the same time.

But Shyamol Chakma, member secretary of UDPF (Democratic), rejected the allegation and said the abduction was a result of the UPDF's internal feud.

According to the PCJSS “More than 300 supporters and leaders of PCJSS had been killed due to internal feud in the CHT after the peace accord. If the accord is fully implemented then the conspirators would never get the chance to create anarchy in the CHT.”

A spokesperson for UPDF, said around 280 leaders and activists of his organisation were killed over internal political feud in the CHT after the peace accord. He added they wanted unity and peace.

The PCJSS and its B team United People's Democratic Front, are involved in criminal activities, including murders and kidnappings. Both of them have increased their activities in the pictorial CHT, which draws a large number of foreign and local tourists around the year.

Sources said two factions of PCJSS, one led by Shantu Larma and the other by MN Larma and Prasit Khisha-led UPDF  were active in the three hill districts.

The simmering unrest in the hilly region came to light after PCJSS and UPDF armed cadres conducted several forays for collecting extortion money from the local people.

In Bandarban, widespread panic among the residents - both tribal people of Chattogram Hill Tracts (CHT) and inhabitants of the plains-after PCJSS gunmen killed several ruling party men, in apparent targeted killing, and a number of government officials and members of the Ansar in a premeditated army-style ambush in the last five years.

The families of the victims are yet to get justice.

He demanded setting up more army camps and building up road communication on the hilly regions for the sake of the common people.

When contacted Bandarban district Superintendent of Police (SP) Zakir Hossain on Tuesday night said that some incidents of killing had recently happened among the rival groups in remote areas of Bandarban over establishing supremacy there. Police and other law enforcing agencies have been conducting separate drives to catch the armed terrorists for long, he added.

“As part of our drive we have already arrested several suspected terrorists from different areas and recovered some firearms from their possession,” the SP pointed out. “There are many remote areas in Bandarban including Ruma, Thanchi, Alikadam which is not easily accessible.”

“When we go there, the armed terrorists usually go too deep inside the forest in the hilla,” Hossain added.

On March 18, this year, seven people, including two polling officials and four Ansar personnel, were shot dead by miscreants in Baghaichhari upazila of Bandarban in one of the worst incidents in recent times. Later on April 9, another person injured during the incident of brushfire died in Dhaka.

On May 5, last year, just a day after the killing of Shaktiman Chakma, chairman of Naniarchar Upazila Parishad in Rangamati, another five people were shot dead in the hill district. The five, including a Bangalee driver, were travelling on a microbus on way to attend the funeral of Shaktiman.

Setu Chakma, 30, another member of Jubo Samiti, and driver Md Sajit, 32, died on their way to hospital.

UPDF (Democratic) is a breakaway faction from the United Peoples Democratic Front (UPDF), a political party of hill people opposing the CHT Peace Accord of 1997.

PCJSS-MN Larma came into being after Santu Larma-led Parbatya Chattagram Jana Samhati Samiti (PCJSS), which had signed the peace accord with the government, split during the past caretaker rule in 2007-08.

On December 2, 1997, under the leadership of MN Larma's younger brother Santu Larma, PCJSS signed the CHT Peace Accord that a large group of students of the hill districts refused to accept, leading to the formation of UPDF.

Doya Sona Chakma, one of the two Hill Women Federation leaders who returned home in late April around a month after being kidnapped, alleged that UPDF (Democratic) members had kidnapped them.

The Hill Women Federation is an associate organisation of UPDF.