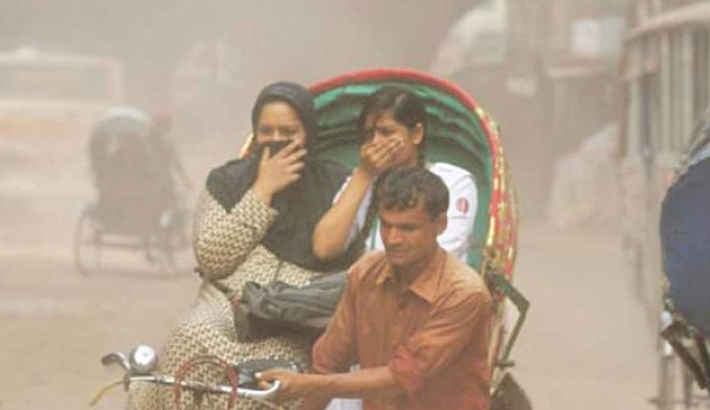 We have also analysed last 10 months’ air quality data in 2019 and found that city dwellers inhale good air for nine days and for 106 days unhealthy to very unhealthy air. Even in the 30 days from 19 September to 18 October, people have to breathe 28 times unhealthy and very unhealthy air in the city. In the year 2019, air pollution has increased about 20 per cent more than 2018.

On the other hand, the State of Global Air 2019 reported that indoor and outdoor air pollution led to 1 lakh 23 thousand deaths in Bangladesh in 2017. The report says that the life of South Asian children will be shortened by 30 months on average if they grow up in the current high levels of air pollution. This report considered air pollution as the fifth risk factor for mortality worldwide. It also shows that less developing countries suffer PM2.5 exposures that are four to five times more than developed countries. This report estimated that air pollution contributes to almost 5 million deaths globally, nearly one in every 10 in 2017. Air pollution (ambient PM2.5, household, and ozone) is also estimated to have contributed to about 4.9 million deaths (8.7 per cent of all deaths globally), 147 million years of healthy life lost in 2017. This report further mentioned that more than 90 per cent of the world’s population lives in areas exceeding the annual air quality guideline set by the World Health Organization (WHO).

In 2019, WHO Reported that 21 per cent of deaths were due to pneumonia, 20 per cent from stroke, 34 per cent from ischemic heart disease, 19 per cent from (COPD) and 7 per cent from lung cancer. In 2017, exposure to PM2.5 was the third leading risk factor for Type 2 diabetes according to disability-adjusted life year (DALYs). Household air pollution remains a leading cause of death and disability worldwide, with a particularly heavy toll in less-developed countries and the study found that 3.6 billion people suffered from household air pollution from use of solid fuels for cooking in 2017. This report represents life expectancy at birth. Air pollution collectively reduces life expectancy on an average by one year and eight months worldwide.

On the other side, WHO reported in 2016 that due to indoor and outdoor air pollution every year 570,000 children under five years die from respiratory infections such as pneumonia. According to the WHO Global Ambient Air Quality Database-2018, 97 per cent of cities are in low-and middle-income countries where the place people live in exceeds the WHO air quality limit.

In 2019, The Department of Environmental Sciences of Stamford University Bangladesh conducted a study on the diversity of airborne fungi of the Polashi Fish Market, Dhaka. The total number of counted fungal colonies was 1067, out of which in the morning there were 924, at noon it 928 and in the evening 829. Five fungal genera have been recorded; Aspergillusniger, Aspergillusflavus, Penicillium, Mucor, and unidentified Sterile mycelium. The three most dominant fungal genus were Aspergillusniger, Penicillium and Aspergillusflavus contributing 28.45, 20.31 and 24.52 per cent in the morning, noon and evening in the months counting of the total colonies, respectively. Aspergillus was found in the highest frequency in the present investigation among the identified fungal genera. In the present study, Penicillium was found 2nd position in terms of its percent frequency and the least frequency in the genus Sterile mycelium. Those mycoflora have a great impact on human and planthealth.

It is important to identify the sources of contamination and reduce specific pollution. The brick kilns around Dhaka should be controlled by the Government. The use of cement sand block brick should increase. The use of advanced and pollution-free technology in brick kilns should be increased. Unfit vehicles must be stopped from plying the roads. Construction materials must not be left out in the open. Waste management must be improved so that the burning of urban or agricultural waste reduce. On the other hand, the existing law of “Clean Air Act” needs to be implemented quickly. Children, old people and pregnant women should use mask when they go outside their homes. To protect children, we need to formulate, implement and monitor plans. Action should be taken at the national and local level against air pollution. An educational campaign should be run in print and electronic media.