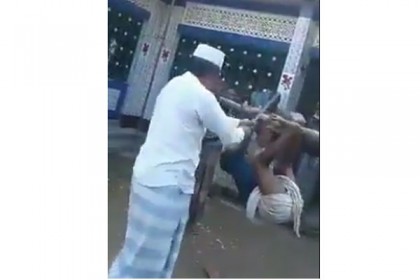 A union council member of Zakiganj Upazila of Sylhet has been detained after his video of torturing a man in arbitration drew much criticism on social media.

According to police, Abdus Salam, a member of Kajalshah Union Parishad, was arrested at Kanaighat along the border with neighbouring India on Thursday afternoon.

The man who was tortured is identified as Gias Uddin Afzal, an inhabitant of Atgram village.

In the video, Afzal is seen hanging from a bamboo with his hands and legs tied while Salam is canning Afzal with a crowd of onlookers gathered around the place.

Additional Superintendent of Police Mahbub Alam informed that the incident took place three to four months ago, but no one made any complaint in this regard.

The Additional Superintendent of Police stated that they were probing other complaints of torture against Salam.