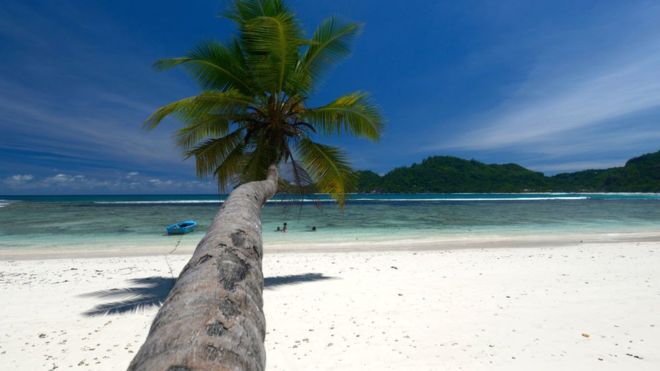 The island paradise of Seychelles is suffering from a drug epidemic of huge proportions.

Known for its coral reefs, mangroves and white sandy beaches, 360,000 tourists travel to the Indian Ocean archipelago each year for a holiday of a lifetime.

But look beyond the private islands, the boutique resorts and high-end restaurants, and the small nation is battling a heroin epidemic of huge proportions.

Between 5,000 and 6,000 people out of a total population of 94,000 - the equivalent of nearly 10% of the working population - are addicted to heroin, according to the Agency for the Prevention of Drug Abuse and Rehabilitation (APDAR) in the Seychelles.

Per capita, the Seychelles suffers from the highest rate of heroin abuse in the world.

Jed Lesperance was 20 years old when he first started taking drugs. He is 34 now.

"I started smoking cannabis with my friends every now and again. At first it was fun," he said.

"But over time I graduated to heroin and it started taking over my life. I was smoking heroin two to three times a day, even stealing from my grandmother to pay for my habit. Within a few weeks, I had become addicted," he said.

Heroin makes the long journey from Central Asia, especially Afghanistan, before being smuggled to the islands via East Africa.

Made up of 115 islands, the Seychelles has many porous borders, which makes them hard to monitor and easy for drugs to come into the country.

But rather than attempting a "war on drugs", which would criminalise the large proportion of heroin users in the Seychelles, the head of the anti-drug agency has introduced a Portuguese-style drug policy - considering drug addiction as a chronic disease to be treated.

"The Agency for the Prevention of Drug Abuse and Rehabilitation was established in August 2017 and we introduced the Methadone Maintenance Programme (MMP) in May 2018," Patrick Herminie told the BBC.

§  To join a high-threshold MMP, which includes a period of in-patient treatment where they must commit to detoxification

§  Or the low-threshold programme, which focuses on harm reduction

Individuals have access to medical and psychosocial support under both programmes.

"Currently, we have over 2,000 people registered in one of our programmes and 68% of those are now gainfully employed," Mr Herminie said.

Mr Lesperance is one of those people who has benefitted from joining a rehabilitation programme set up by the agency.

Each morning, he visits one of the country's roaming methadone clinics - white vans that are manned by drug counsellors and qualified nurses to give the correct dose of methadone to recovering addicts.

Dozens of people line up outside the open windows of the white van ready to show their ID. Their name, the date and time are logged into a spreadsheet and on receipt of the information, the correct dose of methadone is distributed to them.

Mr Lesperance, who has been clean for three months, now works as a pastry chef in a five-star hotel on Mahe, the largest island in the Seychelles.

"Since I found work, I have a lot more stability and it has encouraged me to stay on the programme.

"I have also been able to give some of the money I earn back to my grandmother, which has made our relationship a lot better," he said.

Michelle Sabury, who helps recruit drug addicts on to rehabilitation programmes, agrees that "he is a completely different person".

"When he first came to us, he was underweight and had very little hope. Now he looks a lot healthier and is able to go to work each day. We are proud of what he has achieved," she told the BBC.

After receiving methadone, many of those enrolled in the programme stay to talk with their peers or a counsellor before heading off to work or back home.

Some arrive with family members in tow, illustrating how the stigma attached to treatment in the Seychelles is slowly disintegrating.