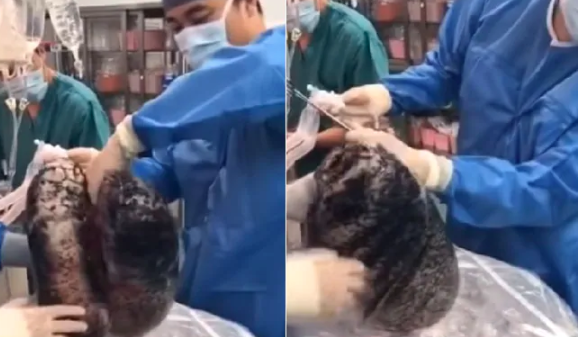 A shocking video shows the tar-blackened lungs of a chain smoker who finished a packet of cigarettes a day for 30 years. Doctors in China were forced to reject the lungs that were extracted for organ transplant after the man died at the age of 52.

According to Daily Mail, the video, recorded by the surgeons, has been viewed more than 25 million times on Chinese social media. Netizens have dubbed it the "best anti-smoking ad ever".

In the video, Doctor Chen Jingyu and his team are seen examining the lungs, blackened and inflamed by years of tobacco use. "Many smokers in this country have lungs which look like this," Doctor Chen wrote, according to 7 News. "Our team decided to reject these lungs for transplant.

"If you're a heavy smoker, your lungs may not be accepted even if you choose to donate them after death."

You can watch the video below, but be warned that it is not for the faint-hearted.

According to Daily Mail, the unnamed man had signed up to donate his organs after death. He died of multiple lung diseases, and doctors were forced to reject his lungs for transplant.

The horrifying video, meanwhile, has created a stir on social media worldwide. "So glad I don't smoke," wrote one person on Twitter, while another added "Disgusting".

According to the World Health Organisation, every year, more than 8 million people die from tobacco use.