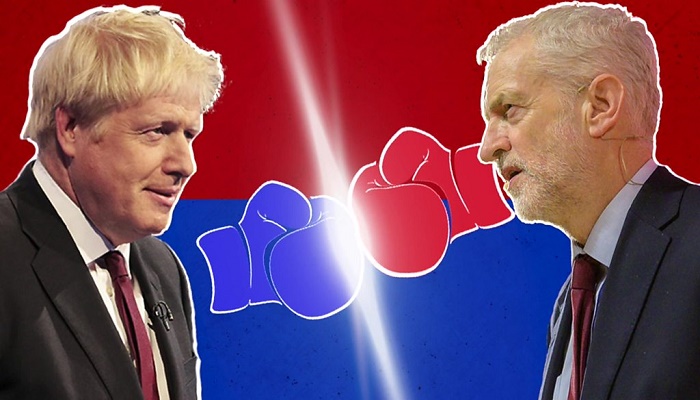 Mr Johnson promised to "end this national misery" and said Labour offered "only division and deadlock".

Mr Corbyn said Labour would "get Brexit sorted by giving you, the people, the final say".

The two leaders also locked horns over the NHS, trust and leadership, the future of Scotland - and the Royal Family.

Meanwhile, the Conservatives received criticism for rebranding one of their Twitter accounts as "factcheckUK" during the debate.

Will Moy, the chief executive of fact-checking website Full Fact, accused the party of trying to "mislead" voters and said Twitter "could have acted sooner," including by forcibly renaming the account.

The NHS and Brexit

The first half of the debate was dominated by questions on Brexit.

Mr Johnson wants to win a majority in 12 December's general election so he can get the Brexit deal he struck with the EU into law and take the UK out of the bloc 31 January and begin talks with Brussels on a permanent trading relationship.

Mr Corbyn says he would tear up Mr Johnson's agreement and negotiate a new deal with the EU, with a customs union and a closer relationship with the single market, which he would then put to a public vote.