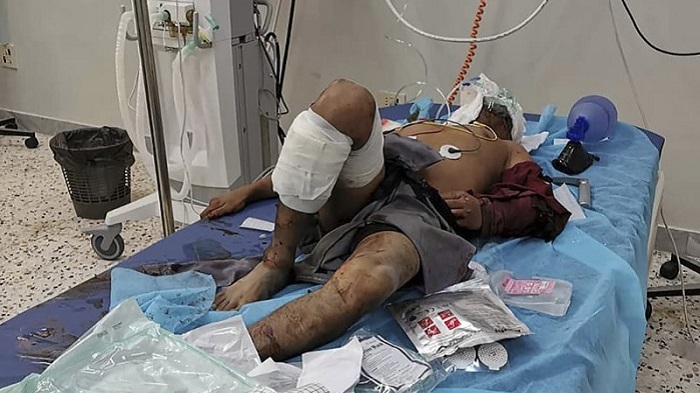 An airstrike slammed into a biscuit factory in Libya’s capital, Tripoli, on Monday killing at least seven workers including five foreign nationals and two Libyans, health authorities said, in what the UN envoy to Libya said could be a war crime.

Tripoli has been the scene of fighting since April between the self-styled Libyan National Army, led by Gen. Khalifa Hifter, and an array of militias loosely allied with the UN-supported but weak government which holds the capital.

The Tripoli-based health ministry said the airstrike took place in the capital’s Wadi el-Rabie neighborhood, south of the city center where fighting has been raging for months.

Malek Merset, a spokesman with the ministry, told The Associated Press that the dead included five workers from Bangladesh and two Libyan nationals.

The airstrike also wounded at least 33 workers, mostly from Niger and Bangladesh, who were taken to nearby hospitals for urgent treatment, Merset said.

Footage shared online showed wounded people with bandages and blood on their legs on stretchers before being taken by ambulances to hospitals.

Ghassan Salame, the UN envoy for Libya, told the UN Security Council on Monday that the attack caused 10 deaths and 35 injuries, and could constitute a war crime.

“Regardless of whether the attack deliberately targeted the factory or was an indiscriminate attack, it may constitute a war crime,” Salame said.

He said the UN is working to verify the facts.

The Tripoli-based government blamed the airstrike on Hifter’s LNA, which did not return calls seeking comment.

Fighting for Tripoli has stalled in recent months, with both sides dug in and shelling one another along the city’s southern reaches. The months of combat have killed hundreds of people and displaced thousands.

Salame said the front lines in southern Tripoli are “highly fluid” and blamed what he said was an intensification of violence on “foreign interference” in the conflict.

“I am gravely worried by the expansion of artillery fire northwards into the city,” he said. “Over the past days, the number of civilians killed and injured has been rising and many families are leaving the areas impacted by the shelling.”

The LNA is the largest and best organized of the country’s many militias, and has the support of Egypt, the United Arab Emirates and Russia. The Tripoli-allied militias, on the other side, are aided by Turkey and Qatar.

Salame warned of “disastrous humanitarian consequences” if fighting and shelling around the capital continues.

The UN Mission in Libya estimates the total number of drone strikes supporting Hifter’s LNA since the beginning of the conflict at “well above 800” and the number supporting the government “at around 240,” Salame said.

Libya has been divided into rival governments, with Tripoli controlling parts of the country’s west, and a rival government in the east aligned with Hifter’s force. Each side is backed by an array of militias and armed groups fighting over resources and territory.

East Libyan authorities said on Sunday a Libyan Airlines aircraft had been seized by officials at the airport in the western city of Misrata. The Tripoli government controls the airport, and militias seen as its political allies occupy the city.

Ezz al-Din al-Mashnoun, a spokesman for Libyan Airlines, said in a statement that the aircraft is the only functioning plane used by the airline in the eastern region.

The passenger jet was undergoing routine maintenance and was due to take off Sunday for the airport in Benghazi.

Hatem al-Oreibi, a spokesman for the eastern Libyan administration, demanded that the Misrata airport return the plane within hours or “face escalatory measures,” without elaborating.

The seizure of the plane came days after east Libyan authorities had begun stopping any flights coming from Misrata, alleging security reasons.

Misrata airport is the only functioning airport in western Libya. Tripoli-allied militias have used it as an airbase during the conflict.

A spokesman for the UN-supported government did not immediately answer calls seeking comment.

The rise in violence this past year threatens to plunge Libya into another bout of violence on the scale of the 2011 conflict that ousted and killed longtime dictator Moammar Gadhafi.