Australian politicians banned from China 'will not repent' for criticism 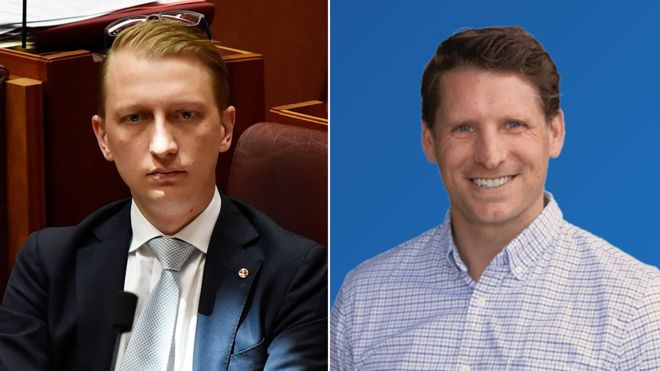 James Paterson, left, and Andrew Hastie, right, have both been outspoken in their criticism of the Chinese state.

Two Australian politicians refused entry to China have said they will not retract their criticisms of the country.

Andrew Hastie and James Paterson, both members of the government, were due to go on a study tour in China next month.

But their visa applications were rejected, and the Chinese embassy said they could only visit if they were to "genuinely repent" for their comments.

Both Mr Hastie and Mr Paterson dismissed the demand.

The conservative politicians have been outspoken critics of China - singling out its human rights record, and its alleged interference in Australian politics.

A third politician due to go on the tour, Labor MP Matt Keogh, had not been denied a visa, according to think-tank China Matters.

There is an ongoing debate about Chinese influence in Australia, with some politicians accusing Beijing of trying to infiltrate Australian politics through donations. Others, however, believe the allegations are fuelling xenophobia and harming relations between the two countries.

In a statement after Mr Hastie's and Mr Paterson's visas were refused, a Chinese embassy spokesperson said that they "do not welcome those who make unwarranted attacks" on the country.