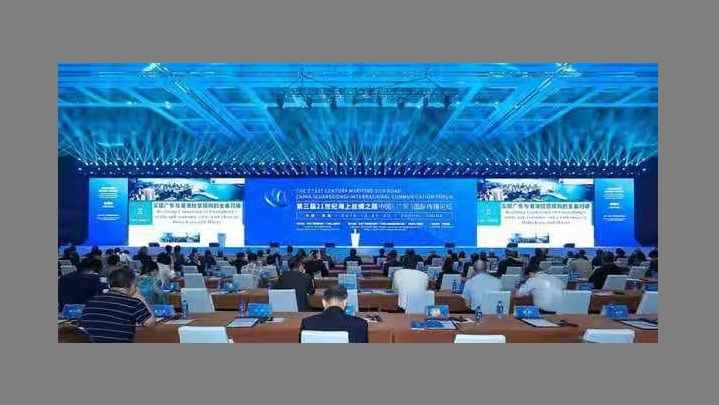 In order to demonstrate the positive results that China has achieved in promoting the Belt and Road Initiative (BRI) development, the third 21st Century Maritime Silk Road China International Communication Forum was held in Zhuhai of Guangdong province, China in the last month. The forum has been an international platform for cooperation and thus it has successfully created enormous opportunities for all participating countries of the BRI on all fronts of cooperation including economic, cultural, media and people-to-people contact.

Co-hosted by China Media Group and the People's Government of Guangdong province and organized by the Information Office of the provincial government and the People's Government of the Zhuhai municipality, the forum has successfully represented an international communication and cooperation platform for boosting the communication between the Chinese and foreign media. It has effectively brought about an international consensus on making concerted efforts to facilitate the BRI construction.

With the theme of 'Integration of the Maritime Silk Road Facilitated by the Development of the Guangdong-Hong Kong-Macao Greater Bay Area (GBA)', the much-hyped international forum has positively responded to the international community's high concerns for the construction of the GBA. It has further demonstrated the excellent business environment and socio-economic development achievements of Guangdong province to the people along the Maritime Silk Road. The internationally-acclaimed forum has also promoted communication, economic and cultural exchanges among the countries and region along the Belt and Road, creating a global  communication platform for external cooperation and display of achievements.

Apart from them, the communication forum has brought about great opportunities for the countries along the BRI. Because they can use the forum as a platform to expand and navigate global markets for their national economy. The BRI countries can also forge ahead win-win cooperation with China under the initiative thanks to the platform. Thus the BRI members can incur more foreign investments into their countries and explore and expand their export and import markets and items through all over the world under the win-win cooperation of the initiative.

Moreover, the BRI participating countries cover more than 65 percent population of the world and they account for over 40 percent of global GDP and around 80 percent of known energy reserves. But in proportion to their economic and population size, their voice is not heard by the world. The media cooperation along the Belt and Road can effectively fill this vacuum which is very much important for peaceful development of the countries. The comprehensive cooperation among media is essential as media can take the benefits of the BRI cooperation to the doorstep of the peoples of participating countries. It is also necessary for the development of the media themselves. Because the cooperation will offer opportunities to them to benefit from each other in terms of contents, technologies and human resources. That's why media cooperation is a must for sustainable success of the BRI. And the third Maritime Silk Road Communication Forum has successfully built the platform for effective global media cooperation. This is definitely one of the major successes of the forum.