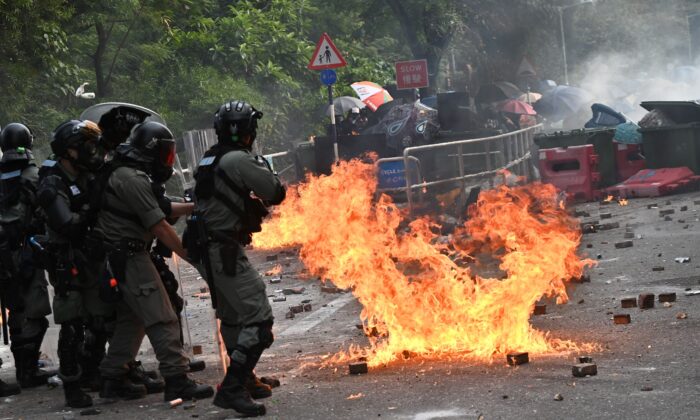 Police are surrounding a Hong Kong university campus after a fiery overnight stand-off with hundreds of protesters inside.

Dozens of protesters tried to leave after sunrise but turned back as police fired tear gas and rubber bullets.

Earlier, police tried to enter Polytechnic University but were met with petrol bombs and bricks.

Demonstrators have been occupying the site for days, as Hong Kong's violent protests continue to escalate.

On Monday morning, the head of the university, Professor Jin-Guang Teng, released a video statement to protesters, saying he had arranged a deal with the police.

The protesters would be able to leave peacefully, Prof Teng said, if they stopped "initiating the use of force".

If protesters left the campus peacefully, he said he would "personally accompany" them to the police station where he would "ensure your case is fairly processed".

But the message seemed to have little effect - and the protesters remain inside the campus.

What is happening at Polytechnic University?

The campus has been occupied by protesters for several days, and a statement from the university on Sunday night said it had been "severely and extensively vandalised".

Overnight, protesters threw petrol bombs and bricks at police, and even fired arrows from bows.

The BBC's Gabriel Gatehouse, who was at the scene, said there was a game of "cat and mouse" with police.

"The protesters, crouching behind umbrellas, respond with petrol bombs and rocks fired from improvised catapults. The police vehicles retreat. The net result is zero."

When police tried to enter the campus at around 0530 local time, they were met with petrol bombs, which started more fires around the site.

After sunrise, dozens of protesters tried to leave the site - but turned back after being met with tear gas and rubber bullets.

One student told the Reuters news agency: "At first I felt very scared and panicked staying here, because the police said all of us inside the university would be arrested for charging riots and we will be sentenced for 10 years or above.

"But now I feel very peaceful because I believe that everyone inside our university will stay together."

On Sunday night, police warned they could use live ammunition.

"If they continue such dangerous actions, we would have no choice but to use the minimum force necessary, including live rounds, to fire back."

On Sunday, a member of police staff was hit in the leg with an arrow apparently fired by a protester from a bow.

Why are there protests in Hong Hong?

Hong Kong - a British colony until 1997 - is part of China under a model known as "one country, two systems".

Under this model, Hong Kong has a high degree of autonomy and people have freedoms unseen in mainland China.

The protests started in June after the government planned to pass a bill that would allow suspects to be extradited to mainland China.

Many feared this would undermine the city's freedoms and judicial independence.

The bill was eventually withdrawn but the protests continued, having evolved into a broader revolt against the police, and the way Hong Kong is administered by Beijing.