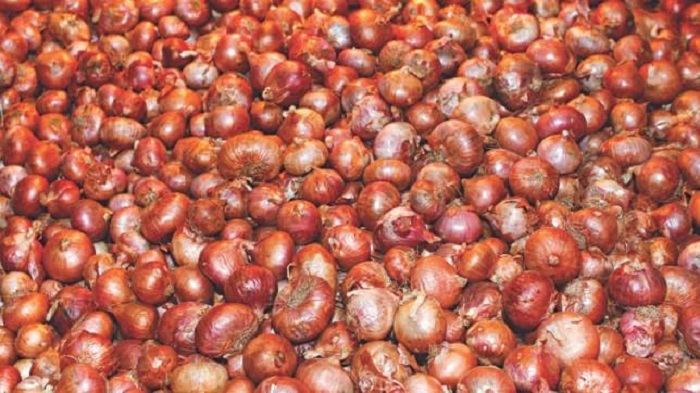 As onion price started falling with the government’s move to import it and arrival of the locally-produced one in the market, the wholesalers in the capital were seen passing the idle time on Sunday due to poor turnout of retailers fearing losses.

Talking to media, a number of wholesalers said retailers were not coming to buy onion apprehending that the price of the essential kitchen item will drop rapidly after the arrival of cargo planes with the imported onion.

Some of them said they have already suffered losses due to the downtrend in the onion price.

Md Shahidul Islam, a wholesaler at Karwan Bazar wholesale market, said he did not buy any onion on Saturday night for wholesale due to lack of an adequate number of retailers.

“I bought 30 sacks of Maynmar onion on Friday at Tk 190-195 per kg but the wholesale price dropped on Saturday due to Friday night’s government announcement to import it from different countries. I’ve to count a loss of Tk 30,000 as the price would fall further with the arrival of the imported onion,” Shahidul added.

Humayun Kabir, a shopkeeper at Kaptan Bazar, said he bought Myanmar onion at Tk 200 per kg from Shyambazar wholesale market in the capital which was sold at Tk 220 per kg on Saturday but it declined by Tk 20 per kg on Sunday.

Another wholesaler at Karwan Bazar, Mohammad Ali, said he bought 146 sacks of the onion of different verities on Friday but 70 sacks remained unsold for lack of buyers and the sale was almost zero today (Sunday).

He apprehended that he may suffer a loss of around Tk 70,000 due to a downtrend in the onion price in city markets.

Abdus Salam, an onion trader at Shyambazar, said they were selling it at a price which is Tk 10-20 less than Saturday’s.

Azizur Rahman, a retailer at Shantinagar, said they were selling local onion at Tk 250 per kg and it is now available at Tk 240 on Sunday.

Amid the overheated onion market, state-owned Trading Corporation of Bangladesh (TCB) started selling onion imported from Myanmar at Tk 45 per kg in front of its head office in the city’s Karwan Bazar area on Sunday.

According to Madaripur correspondent, onion was selling at Tk 175 while spring onion (onion with leaves) at Tk 100 per kg at retail market of Puran Bazar in the district town on Saturday evening.

Farmers in Faridpur have also started selling the newly-harvested local variety of onion, ‘Murikata’, at Tk 112 per kg.

On September 29, the Indian government banned onion export with immediate effect till further order for what it says improving domestic availability, which triggered the onion price hike in Bangladesh.